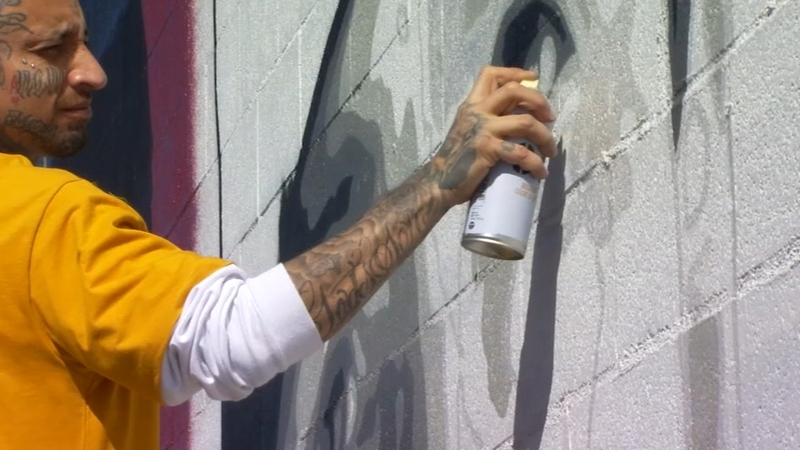 FRESNO, Calif. (KFSN) -- Across from the mural on Blackstone near Belmont, another one memorializing lost loved ones has been covered up with white paint.

Omar "Super" Huerta says he had permission from a store manager to paint the mural eight months ago but the property owner now wanted the wall to be painted.

"It was just a decision," Huerta said. "They wanted a different mural put on there."

Huerta doesn't want to dwell on that decision. He just wants to do something to lessen the pain felt by those whose family members or friends were featured on the wall.

"You lost your angel and now, this happens to your mural," he said. "I'm pretty sure it was a pretty intense feeling for them."

After hearing the mural was covered up, the owner of a tire and auto repair shop on First and Floradora reached out to Omar and offered a wall to paint a new tribute to the 13 victims of violence.

"That's like knowing that they're here for us," Huerta said. "That's knowing that we all support one another. It's great to receive feedback as fast as I received it. So that's great to know they care."

Huerta says a second wall at another location would also be available if needed but he likes this spot.

"I saw it was a perfect location and also because it's gated, so it's going to be pretty safe here," Huerta said.

After all of the tires are moved away from the front of the wall, Huerta figures he can start laying down primer in about two weeks.

Omar wants to get the project done quickly because he knows some families are hurting right now.

"I can't live like that," he said. "I felt like I had to make it better. I feel like let's bring it back to them. Let's give them that feeling - a little bit of peace back to them."