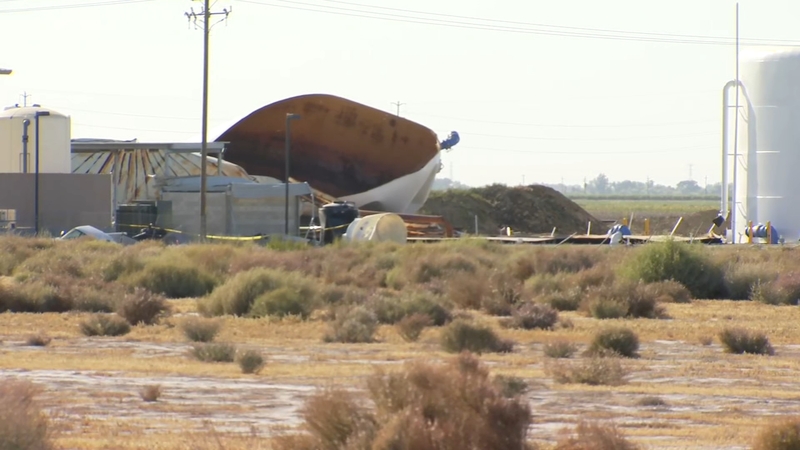 One killed after water tank ruptures in Lemoore

An investigation into what happened is now underway as city officials work to keep water flowing for residents.

Joe Sanchez, who was also working at the scene when it happened, calls the entire incident a freak accident.

"All I heard was an explosion. I looked up and I seen the shadow, and it was that vessel blocking out the sun and it flew to the west and it landed on its top," said Sanchez.

Sanchez is one of four people who were working on the tank in Lemoore on Monday afternoon when the tank failed.

He and two other contractors were there along with a city employee.

City officials are calling the incident a 'mechanical failure'.

"Contractor was up -- we had the tank cut open -- we were attempting to weld a new bung in to make the connection and the tank failed as he started the repair," said Lemoore City Manager Nathan Olson.

Sanchez said his boss was working on a boom lift attached to a work truck right alongside the water tank.

He said the truck and his boss were pushed out nearly 50 yards from where they were working.

As soon as the water cleared, Sanchez said he ran to find his boss and performed CPR until emergency crews arrived.

Lemoore officials said a city employee was also injured and taken to the hospital but is expected to be ok.

The contractor, Sanchez's boss, did not survive.

"He's a good guy. He's a family man. He deserved to go home to his family, just like everybody else, and it just didn't happen today," Sanchez said.

West Hills College Lemoore is right across the street from the site.

The campus was evacuated and classes were canceled for the rest of the day Monday.

Classes are expected to resume Tuesday.

City officials say they are working to get other wells, that are normally idle, up and running to keep water flowing to customers.

The water tank that failed will take months to completely rebuild.

"The short term goal will be to get the wells to be able to transfer to that north tank and chlorinate to make it safe for drinking for the residents of Lemoore." Olson said.

Cal/OSHA responded to the site Monday afternoon to begin its investigation.