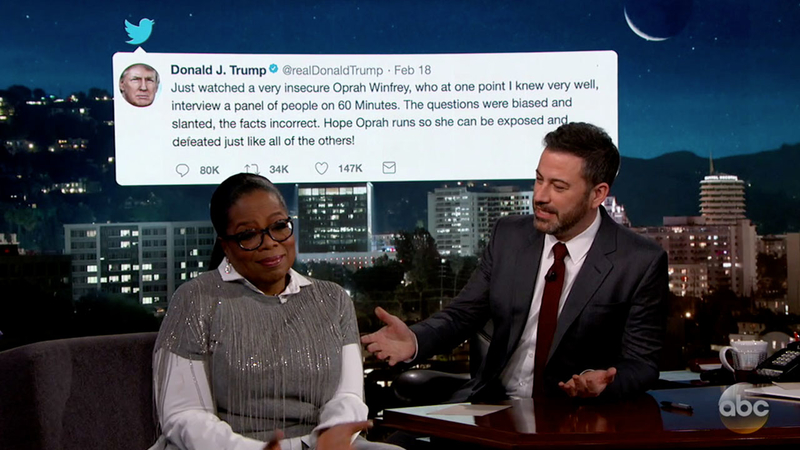 Oprah responds to Trump's call for her presidential run

Oprah is clearing up the rumors once and for all: She is definitely not running for president, no matter what President Donald Trump says.

"Where do I look into the camera?" she asked on Jimmy Kimmel Live Thursday before saying slowly, "I am definitely not running for president."

She added, ''It's a humbling thing to have people think that you can run the country."

Kimmel brought up the president's tweet in which he called her insecure and mocked her, asking her to run so she could lose.

Just watched a very insecure Oprah Winfrey, who at one point I knew very well, interview a panel of people on 60 Minutes. The questions were biased and slanted, the facts incorrect. Hope Oprah runs so she can be exposed and defeated just like all of the others!

Oprah said she'd been informed of the tweet by director Ava Duvernay, who she recently worked with in A Wrinkle in Time.

When asked if she ever thought of responding, Oprah replied, "Not [for] a second ... You don't win by meeting any kind of negativity head-on."

The rumors that Oprah would run for president began after her stirring speech about the #MeToo movement at the Golden Globes. After she gave it, she immediately began trending with many fans using #Oprah2020. The media mogul said that she never expected her speech to be received the way it was.

"Reese [Witherspoon] and I were walking off and I went 'Oh, that's done,' and I thought it was over," she told Kimmel. "I was just happy, [saying] 'Oh now I'm going to have some tequila.'"