Adassa is the voice of Dolores Madrigal in Disney's smash hit 'Encanto.' The animated film is nominated for three Oscars.
WPVI
By Alicia Vitarelli 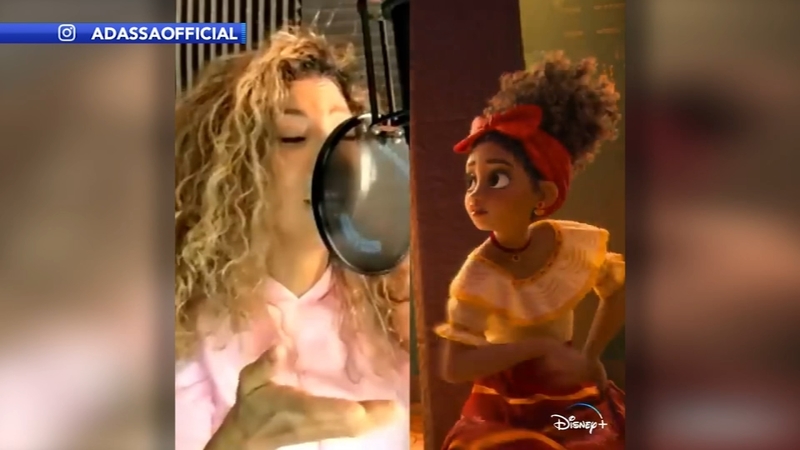 As stars descend upon the most famous red carpet in the world, they bring with them dreams realized and true success stories.

Adassa is the voice of Dolores Madrigal in Disney's smash hit 'Encanto.' The animated film is nominated for three Oscars.

Adassa will be on stage with her castmates for the first-ever live performance of the Billboard sensation 'We Don't Talk About Bruno.'

Adassa is Colombian and has performed with stars like Daddy Yankee, Missy Elliott, Pitbull and others.

Alicia Vitarelli speaks with the cast of Encanto

Getting to this moment brought extreme highs and lows for the reggaeton singer who has been performing for 20 years.

"We get the call congratulating me that I got the role, and I can barely speak," Adassa explains. "My husband covers up the phone and he says, 'I think you should tell her you can't take this.'"

"And I told him, 'No. We will tell them that if I'm dead. I'm taking this.' I mustered enough strength to say, 'Thank you very much. When do I start?'"

The role of a lifetime, Dolores Madrigal came at the exact moment Adassa was battling a mystery illness that was causing paralysis of her body and vocal cords.

"There's so many unknowns with COVID," Adassa explains. "Doctors told me there's nothing they can do. I went home. I went home to die."

For the next three weeks, Adassa would fight, like Rocky she says, for her health and her voice, which was still weak and whisper-like.

"If I could talk to my 10-year-old self, I'd say, 'Get ready for a fun ride. We have the best job in the world," said Byron Howard, one of the directors of "Encanto."

"I got to record," she says, beaming. "Imagine, I'm just coming back and then I meet with the directors and they're like, 'Okay, so we're thinking for Dolores to be a very hushed speaker and she's an intimate. I said, 'No way. I got this. That's exactly where I was in my progress.

Now, she's taking the stage at the Oscars.