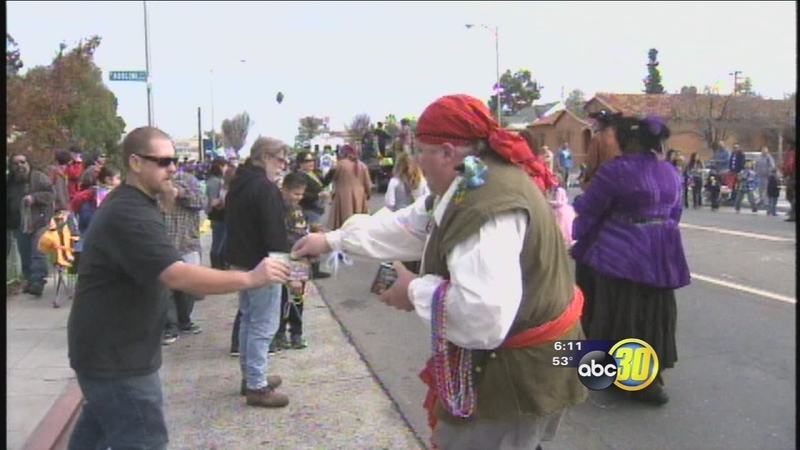 FRESNO, Calif. (KFSN) -- Fresno may see its final Mardi Gras parade in the next week. After 20 years, the costs may break the bank.

The streets of the Tower District have turned green and purple just before Lent every year since 1997. The daytime parade is more family friendly than its ancestors in New Orleans and around the globe, but it manages to stay a little weird.

"It's really wonderful to see the way the community has embraced this event and made it its own and it is uniquely Tower," said Felix Muzquiz of the Tower District Marketing Committee.

For Terry Story, the Feb. 26 parade will be his second as a Tower business owner, and he's very prepared.

"The beads were going to be passing out, given away," he said as he grabbed the colorful beads around his neck.

But he's also worried it could be his last.

The city of Fresno warned organizers the cost could go up this year because of road closures. The so-called "soft closures" they've done for years -- with police officers rolling from street to street and blocking traffic -- are being replaced by "hard closures" -- with barricades and warning signs.

"After I picked up my jaw after it dropped because the expense was so great, yeah, it really bothered me," Story said.

A city spokesman told Action News the new requirement comes from the state and it's supposed to protect crowds from drivers who might hit them. It'll apply to any festival or parade in the city. But with just nine businesses supporting the Tower District Marketing Committee, the added cost makes it hard to let the good times roll.

"Well, it's huge," Muzquiz said through a deep sigh. "We don't have those kinds of numbers in our bank account, for the most part. It's going to wipe us out."

Organizers believe Fresno's is already the last Mardi Gras parade on the West Coast. They're doing fundraisers -- inside businesses and online -- to make up the difference. But a parade that already turned no profit may just float away into history.