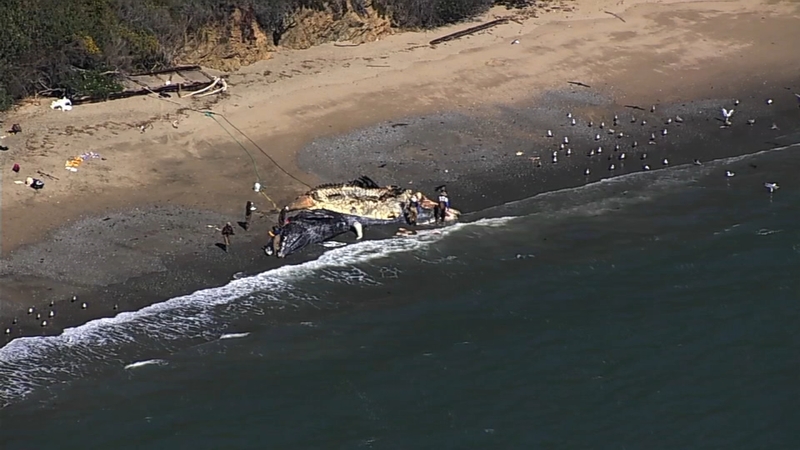 Another whale found dead at Bay Area beach; 4th in over a week

PACIFICA, Calif. -- The carcass of a gray whale discovered on Pacifica State Beach on Friday was the 12th dead whale to wash up on a San Francisco Bay Area beach this year, authorities said.

Tissue samples collected on Saturday confirmed it was an approximately 47-foot (14-meter) adult male, said Giancarlo Rulli, a spokesman for The Marine Mammal Center. He said because the whale was in an advanced state of decomposition, scientists decided not to perform a necropsy to determine how it died.

Ten gray whales, one pygmy sperm whale and one fin whale have been reported dead on San Francisco Bay Area shores since the start of 2021, according to the California Academy of Sciences. Necropsies revealed that two died of a ship strike and two others were suspected to have died of ship strikes. Eight of the deaths were from undetermined causes.

Since 2019, the U.S. National Oceanic and Atmospheric Administration has been investigating what it terms an unusual mortality event because of a higher rate of emaciated or injured gray whales stranded on beaches across the West Coast.

Malnutrition, entanglement and trauma from ship strikes have been the most common causes of whale deaths in the Bay Area in recent years, according to the Mammal Center.

So far in 2021, there have been 66 gray whale strandings on the beaches and coasts of Mexico, the U.S. and Canada, NOAA said.

NatGeo drone video of two critically endangered North Atlantic right whales shows the animals appearing to hug one another with their flippers.