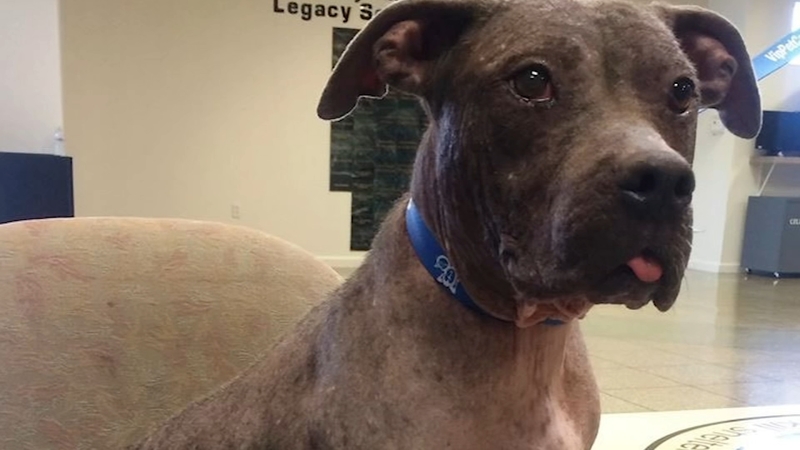 FRESNO, Calif. (KFSN) -- A dog named Ava who was abandoned twice in two different states is on her way to Fresno.

"That girl is just the sweetest pitbull ever and we know that she is going to find that perfect loving home," said Devon Gillard with the Valley Animal Center

Three years ago, the Valley Animal Center thought they did, but it was not the happy ending they hoped for for Ava.

Flash forward to 2019 - Ava was abandoned, wandering the streets of Arizona under the beating hot sun.

"Of course we know that this time of year if it is this hot in California, especially in the Central Valley, it is definitely not cool out in Arizona," Gillard said.

This is the second time she has been rescued - the first was back in 2016. Ava was left abandoned in a field near Orange Cove. She was found malnourished and underweight, her fur gone after mange ravaged her body.

"Really you could just see skin and bones, she had mange and was in horrible condition," Gillard said.

The Valley Animal Center took Ava in and gave her a second chance at life. Her fur didn't grow back, but that didn't matter, she was healthy and soon after adopted.

"Ava went into a home with another dog sibling and was there until - we are hoping - most recently," said Gillard.

Animal Control found Ava malnourished again and unsure how long she was alone. Her microchip connected her back to Valley Animal Center.

After countless failed attempts to get in touch with Ava's owners, who moved to Arizona, the animal center decided to bring her back. The only problem was they did not have the funding. They asked the community for help and it delivered.

"They raised enough money not only to handle the transport of Ava coming back to Valley Animal Center but for us to have a little bit of cushion also to take care of any medical needs," Gillard said.