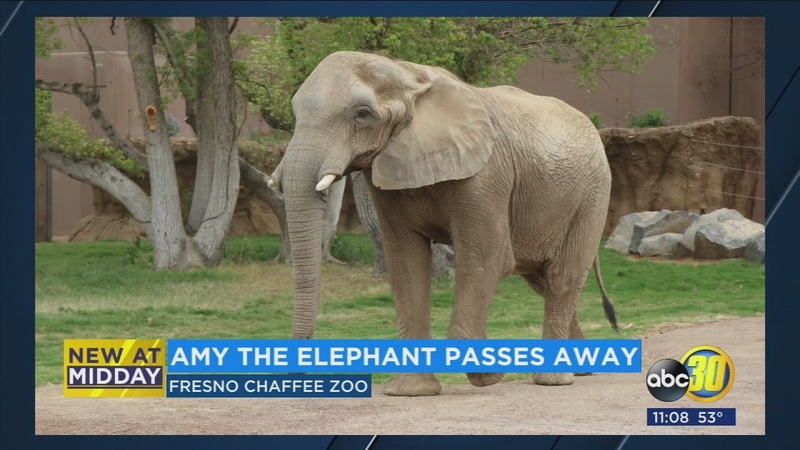 FRESNO, Calif. (KFSN) -- According to officials at the Fresno Chaffee Zoo, Amy, the 30-year-old female African elephant, has died.

Despite over two years of advanced medical treatments, Amy was humanely euthanized on December 11, 2017, due to a rapid decline in health which originated from a ligament tear in her right elbow.

"Amy's ligament tear led to her development of severe arthritis," said Dr. Shannon Nodolf, the chief veterinary officer at Fresno Chaffee Zoo. "Amy's inability to use her leg due to this injury greatly impacted her mobility and well-being by leading to the progressive, painful degeneration of her other joints. Although she had been under active veterinary care, we reached a point where we were unable to stop the progression of her decline and were no longer able to manage her pain."

Zoo officials said Amy came to the zoo in May of 2015 along with her daughter, Betts, from a wildlife sanctuary in Arkansas.

Officials said the exact cause of Amy's ligament tear is unknown.

"Unfortunately, we won't be able to identify the exact cause of her torn ligament," Nodolf said. "A few months after Amy's arrival in Fresno, the animal care team discovered that she was reluctant to bend her right elbow. Ever since then, we have been working persistently to improve her mobility and make her as comfortable as possible."

Officials said in an attempt to improve Amy's condition, the Zoo's veterinary team consulted with experts from around the country.

Amy's team of dedicated zookeeper's released a statement saying, "Amy was an extraordinary animal in every way. She was a very strong-willed elephant and taught us that when you invest the time and patience to build a relationship, it's always worth it. Through her life, she brought joy to so many people, and we were lucky enough to share in that joy for her final years. The elephant house will feel very empty without her big personality in it."
Report a correction or typo
Related topics:
pets & animalsfresno chaffee zoofresnoelephant
Copyright © 2021 KFSN-TV. All Rights Reserved.
FRESNO
Man convicted of 2nd-degree murder for 2019 Fresno stabbing
Fresno athlete donates kidney for ex-classmate's dad
Fresnans brave intense heat to celebrate at block party
Fresno zoo offering free admission to underprivileged kids
TOP STORIES
City of Fresno can take over responsibility of regulating mobile homes
Fresno police seize 400 pounds of illegal fireworks
DA investigates alleged Brown Act violations by Fresno council members
At least 3 dead, up to 99 missing in Florida building collapse
Security camera video shows moment of Surfside building collapse
Nonprofit calling for action after fire in SW Fresno
Police searching for central Fresno vandalism suspect
Show More
Biden administration extends eviction moratorium for 30 days
Newsom to face recall election later this year
Report: Gov. Newsom overstated fire prevention work
Nearly all COVID deaths in US are now among unvaccinated
Fresno Fire and police teaming up to combat illegal fireworks
More TOP STORIES News