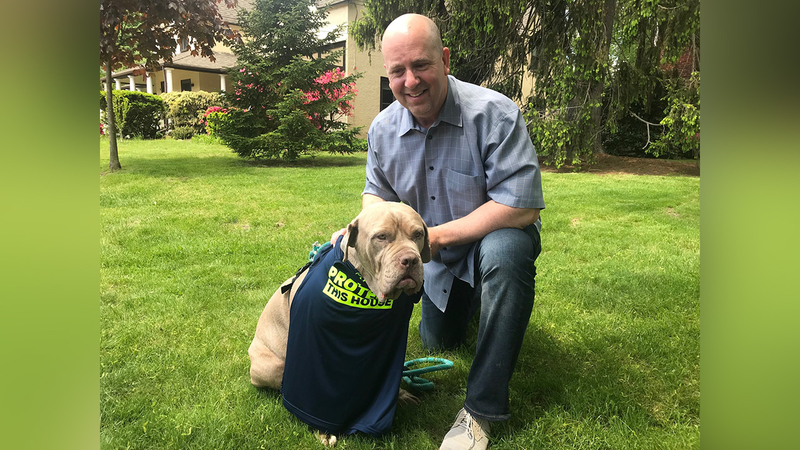 RAMSEY, New Jersey -- A rescue dog is being hailed a hero after he attacked an intruder and scared the perpetrator from his New Jersey home.

Enzo, a 114-pound Neapolitan Mastiff, has gone from being a rescue dog to a crime fighter, and there is plenty of bloody proof to show that when it comes to stopping crime, he doesn't mess around.

Enzo rarely barks and initially sat back quietly on the couch as someone tried to break into his owner's apartment on Arch Street in Ramsey.

According to reports, Enzo took a bite out of the intruder before the suspect could get all the way in a front window.

"He pulled it up, knocked out the screen and then climbed in that way," owner Mark Slepian said. "What they think happened was the guy was trying to get in, he bit his hand and started shaking like this, cause that's what caused the blood to splatter."

Slepian says Enzo is a "big marshmallow," but this breed is known to be very protective, especially of his home.

Enzo's journey to the Garden State began a year ago at a Texas shelter, where he was just an hour away from being put down when an unknown savior stepped in.

He was rescued and taken to Kentucky, where Slepian found him on Facebook.

They have since created a tight bond.

The burglary may have been thwarted, but it appears from the photos that the dog got the upper hand as the intruder left a lot of blood behind.

Slepian sat proudly with Enzo, who donned a shirt that fittingly says, "Protect this house."

Police are still trying to determine the source of the blood, but Enzo shows no signs of injury.

"Blood all in here," Slepian said. "The door was closed...there was blood here, still some blood here, on the walls too."

No arrests have been made, but with so much blood, authorities believe the burglar may have gone for medical treatment.

So far, no one has reported being treated for dog bites.