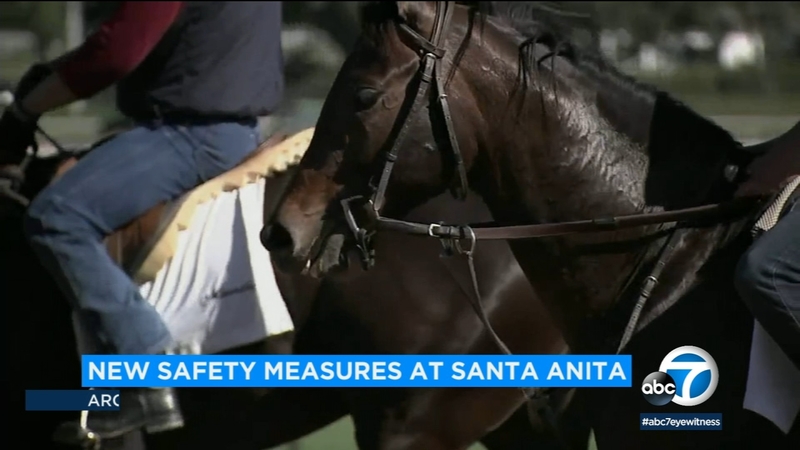 ARCADIA, Calif. -- Following the death of 29 horses this season at Santa Anita Park, the track has agreed to new safety measures that will grant independent veterinarians the power to prevent horses from racing if they seem unfit.

The new safety measures agreed to by the California Horse Racing Board and the owners of Santa Anita set up a panel of veterinarians that will examine horses' conditions and medical history before a race.

If even one member of the five-member team believes a horse is at elevated risk of injury, the horse will be scratched from the race.

The announcement comes as animal rights activists push to shut down the track following the string of horse deaths this season.

Gov. Gavin Newsom on Tuesday called on the CHRB to implement new safety procedures at the track.

"I continue to be troubled by the horse deaths at Santa Anita Park," Newsom said. "Enough is enough. I am calling on the California Horse Racing Board to ensure that no horse races until they are examined by independent veterinarians and found fit to compete.

"As Santa Anita prepares to host the 2019 Breeders' Cup in November, we must show the horse racing world that California puts safety first."

State officials say The Stronach Group, which owns Santa Anita, has agreed to the new procedures.

"Horse and rider safety is our top priority at Santa Anita Park, and we remain steadfast in our commitment to making California horse racing the safest and best in the world," said TSG President and Chairwoman Belinda Stronach. "We look forward to working with Governor Newsom and the California Horse Racing Board as they implement this additional layer of review through the end of our current meet."

The new changes will take effect for the season's final six racing days at the park.

Two horses died over the weekend at the park. The Daily Racing Form reported that a three-year-old filly collapsed and died of an apparent heart attack during a race Sunday.

Another horse had to be euthanized Saturday after suffering an injury during a race.
The state racing board says Santa Anita has refused its request to suspend racing at the track for the final week of the season.

The board does not have the authority to suspend racing without giving 10 days notice for a public meeting.

Two more horses have died at Santa Anita Park, bringing the total number of deaths this season to 29 since late December.