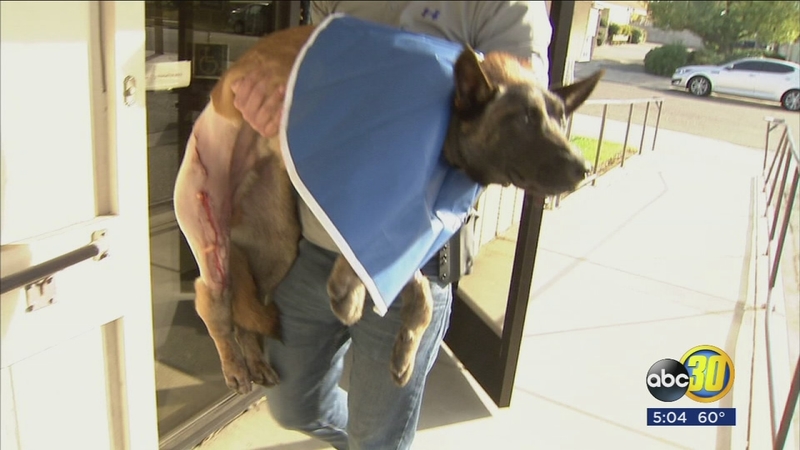 His doctor tells me that dash will have a nice restful Christmas but we could be looking at months of recovery and perhaps even another surgery before he is feeling back to his old self.

The good news is dash is out of the hospital.

Dr. Carrie Strickland said, "Considering what happened, the situation surrounding his injury this could've been a lot worse so we're pretty pleased."

Dash was shot in the line of duty outside of Lemoore Sunday night while trying to arrest a murder suspect along with his handler -- a Kings County Sheriff's deputy.

The doctor is optimistic Dash will make a full recovery and could one day be able to perform his K-9 duties again.

"Even though he's gone and going home and he's healthy at this point he still has a ways to go and we'll have to continue to monitor him very closely for the next six to eight weeks," Dr. Strickland said.

Dash was shot and wounded by the suspect, who was then shot and killed by the other officers.

A highway patrol helicopter flew Dash to Fresno where he underwent emergency surgery.

"He is one of the best natured I've come across. You don't see a dog like him very often he's real special, we're all gunning for him that he's going to recover to full shape and working form."

Dash is one of four German Shepherds in the Kings County K-9 Team.

The community helps fund the unit. If you would like to donate to Dash: