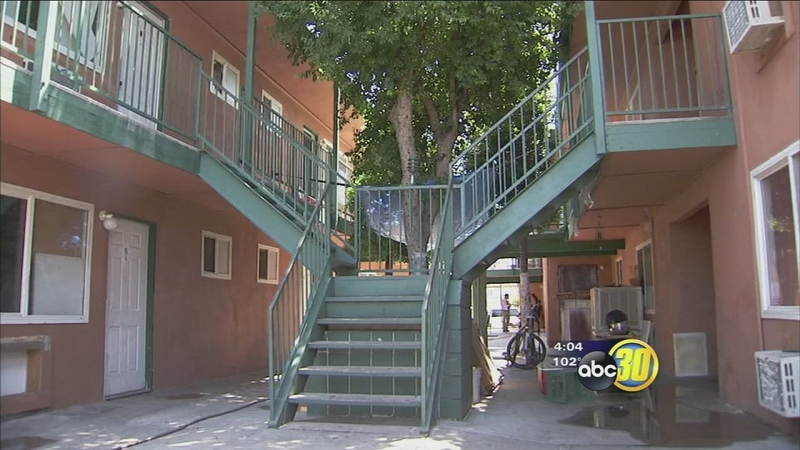 FRESNO, Calif. (KFSN) -- On a day the temperature was expected to hit 106 degrees some central Fresno residents were dealing with a fifth day without power.

Electricity to their complex was shut off last Thursday by PG&E.

We're headed into our hottest stretch of the summer so far and residents weren't sure when the power will come back on.
PG&E says the shutdown was the result of electricity theft.

They cut off electricity to Mary's Apartments on Thursday after discovering several residents were illegally tapping into the power grid.

PG&E says it had no choice but to disconnect the electricity because unauthorized modifications to the meters and panels put residents at risk.

"It's been difficult," resident Tracy Armstrong said. "No power, no food. We have water but it's not cold."

These past few days the Lowell community development corporation provided ice so families could keep their food cold and have something cool to drink.

"When I'm here they use my generator to charge their cell phones or I'll shave them ice and they'll go use it to keep their food cold or whatever they got," neighbor Jaime Hollis explained.

The apartment manager says the bay area owner of the property sold the property this weekend to a local owner.

"We're hoping for a new owner soon and with that, improvements," Esther Delahay with Lowell CDC. "Someone who cares about this neighborhood, this apartment complex and these residents."

Workers and city inspectors were out checking the complex before power could be restored by PG&E.

Armstrong says the low-income residents had nowhere to turn as temperatures soared.

"To us, not only was the owner in neglect but we kind of feel the city might have been in a little bit of neglect too because they knew the owner would not help us and they walked away too," she said.