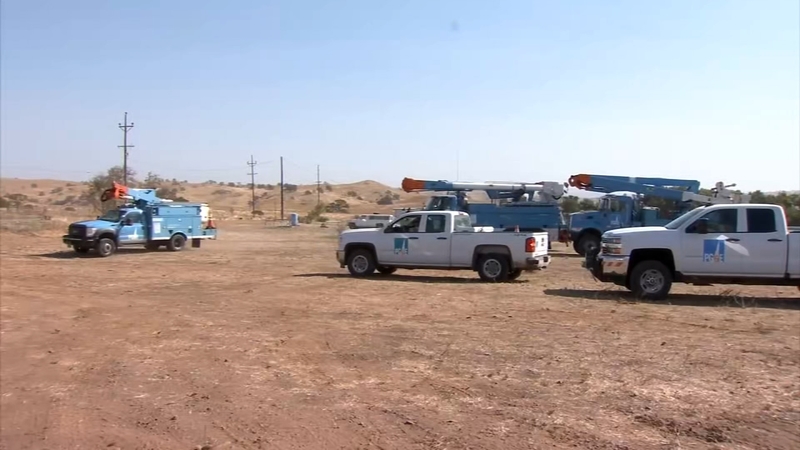 Crews of the Pacific Gas and Electric Company started to inspect and repair any damaged lines in the county on Thursday.

The company announced late Thursday that it has restored power to more than 50% of customers affected by its power shutoffs in California - including some in Mariposa County.

About 1,800 customers have been affected by the shutoffs in the county. It is not clear how many of them have had their power restored.

Here is a list of the areas that were affected:

The affected areas are shown in PINK on the map. Also, the map shows the current Briceburg Fire evacuations and advisories.

The shutoffs are a part of a statewide plan by the company affecting 800,000 customers across California, based on forecasts of dry, hot and windy weather including potential fire risk.

PG&E said about 426,000 out of a total 738,000 customers have had their power restored, including full restoration in Humboldt, Siskiyou and Trinity counties. About 312,000 customers remain without power, it said.

RELATED: PG&E says more than half of California customers impacted by outages have now been restored

The Mariposa County Unified School District said the Lake Don Pedro, Greeley Hill Elementary and Coulterville High Schools, which had been closed for the last two days, would resume their regular schedules on Friday.

PG&E says phase 2 is complete and if customers have not lost power by now, they will not lose it.

Governor Gavin Newsom held a press conference Thursday evening saying that there needs to be a "radical" change to prevent future issues with shutoffs.

Where to go for help

PG&E has opened a Community Resource Center in Coulterville. It says the center will remain open during daylight hours only and will have restrooms, bottled water, electronic-device charging, and air-conditioned seating.
The center is located at 10293 Ferry Road, Coulterville, CA 95311.

The Mariposa County Sheriff's Office is staffing its two substations in Greeley Hill and LaGrange around the clock right now.

Crews of the Pacific Gas and Electric Company have started to inspect and repair any damaged lines in Mariposa County.

People whose phones may not be working during the outage can go there if necessary so deputies or volunteers can radio for help.

Many residents said they're doing their best to keep gas in their generators and keep their food cold, but they're getting more frustrated with every hour that passes.

Many are questioning why they're dealing with this emergency.

"We haven't even had winds stronger than 17 miles an hour up here and we were shut down. We've had winds where it take roofs off of buildings and we still had power, so this seems to be a little extreme," said Diane Albert of Lake Don Pedro.

RELATED: AT&T offers unlimited talk, text, data for customers who could be hit by PG&E outage

Many people feel the utility company should fix its own infrastructure to prevent its power lines from sparking devastating blazes like last year's Camp Fire, instead of implementing shutdowns.

"It seems like they're trying to punish us for what they did and the money they have to pay out," said Lake Don Pedro resident Sally Miller.

One of the biggest concerns right now is for people with medical issues that require power.

The past 24 hours have been extremely stressful for Gary McIntosh.

He lives in the Lake Don Pedro subdivision, which lost power Wednesday afternoon.

"She takes 30 plus medications a day. She has an insulin medication that requires refrigeration so it's going to go bad, and we can't afford to replace it," McIntosh said.

He is a veteran who also worked for PG&E about 40 years ago.

He says he's now living on a fixed income and can't afford a generator either.

His main is his wife's medication, but they've also been dealing with other frustrating effects of having no electricity.

"We were washing clothes, and our machine is one of these electronic devices, the power went off, the lid's locked shut, we can't get the clothes out of the washer."