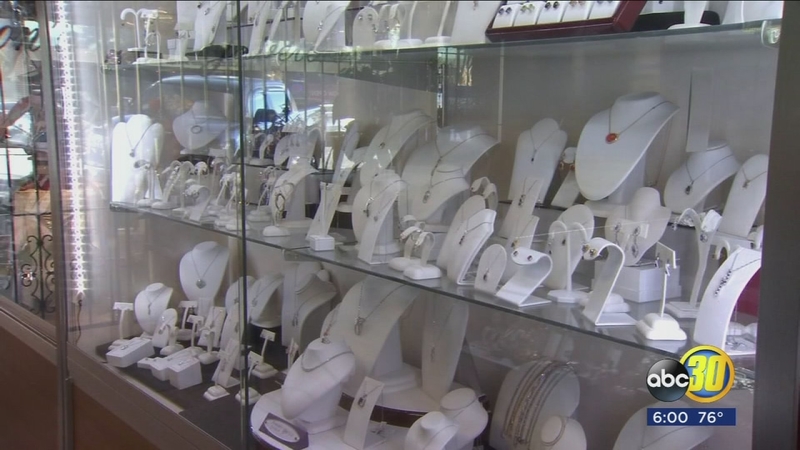 EMBED <>More Videos
FRESNO, Calif. (KFSN) -- Store owners say the suspect was able to distract an employee for just a few moments but it was long enough for the other two suspects to reach over the counter, and get away with more than 17,000 dollars worth of jewelry.
It only took a little distraction for three suspects to get away with thousands of dollars worth of jewelry from two North Valley stores.

In surveillance video one of the suspects is seen distracting the employee while the other quickly reaches over the counter and takes the merchandise. Madera Police say the suspects got away with about $7,300 worth of items from Leighton Jewelry in early October.

"They had the story that they were purchasing something for a relative," said Pearson.

Sherry Pearson of Pearson's Jewelry in Los Banos says three men also came into her store about an hour after the incident in Madera.

"Normally three men don't come in to shop together so, and never had seen them before, so that put up a red flag," said Pearson.
Pearson says her husband was working at the time, one of the suspects started to distract him while the other thieves were quick to snatch $17,000 worth of jewelry.

Pearson claims the suspects in Madera's incident were the same ones who came into her shop.

"It looked like they had done this before and they seem to go to areas of high dollar value," Pearson.

Los Banos Police Detectives are now working alongside Madera Investigators to find the men in the video.
Detective Sean Bayard says they do have some investigative leads, and it is possible the brazen criminals could be from out of the area.

"Due to the fact that they did not conceal their identities and the took the opportunity to commit theft here locally, I don't recognize them and none of our detectives recognized them right off the bat," said Baynard.

Pearson says she plans to upgrade her surveillance and be more vigilant of who comes through her doors.