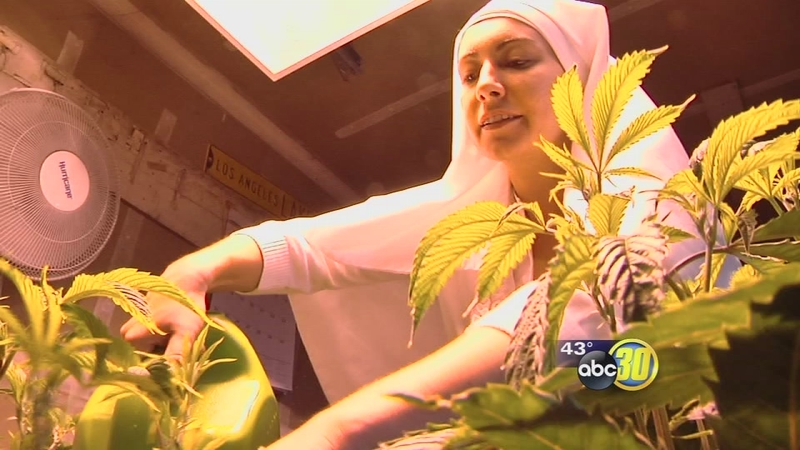 MERCED, Calif. (KFSN) -- Despite a proposed medical marijuana ban, two self-proclaimed 'nuns' in Merced are continuing their quest to heal the sick with their home-made, THC-free, cannabis-based tonics and salves.

The power prayer has gone a long way for Sister Kate, "I would say our prayers have been answered," she added, "I would say this is a doubtful blessing."

The blessing is going straight to the sisterhood but not one of a religious order. Sister Kate runs a business called the Sisters of the Valley-- a very successful business, considering the numbers. A year ago, she was making $300 dollars a day through online sales. Today, she's pulling in $3,000 a day on average and she's shipping boxes of products all over the world. "We can make jobs out of that which is the only thing we want to do -- make easy, honorable, spiritually filled jobs for the women of the central valley," Sister Kate said.

The city she's in, Merced, isn't quite ready for it. The mayor and city council members have questions and they're not sure how to regulate a small medical pot industry. "We need to make a data-driven decision," said Mayor Stan Thurston, "to me, we don't have anywhere near sufficient data to make a decision tonight that will really serve the public."

After a long discussion Monday night, a decision was made to buy more time for research but in the meantime, cultivation and sales would be banned under a proposed ordinance. For Sister Kate, it would be a threat to production but her apprentice, Sister Darcey says it won't stop them. "Really, what last night did was fuel the fire for everyone to work harder to change their minds," said Sister Darcey.