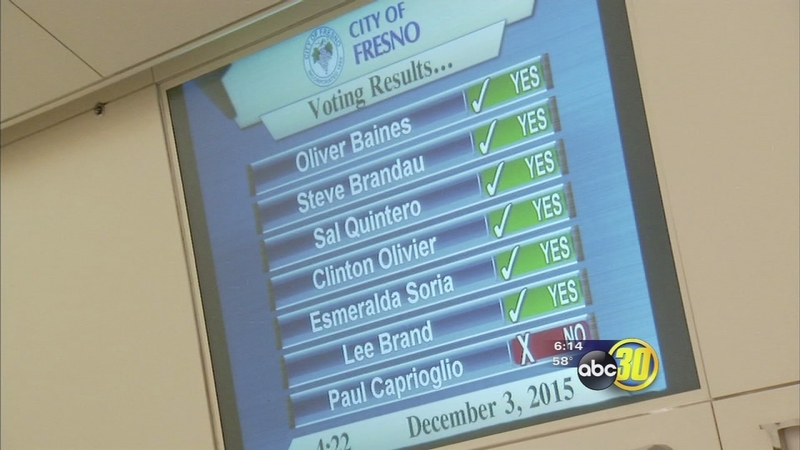 FRESNO, Calif. (KFSN) -- A controversial contract to tear up the Fulton Mall and put in a street has been approved by the Fresno City Council.

The city council approved the plan to return traffic to the six-block pedestrian mall a year ago. The contract to do the work, however, came in at $22-and-a-half-million, $2 million over budget. Opponents saw that as a reason to stop the project, but the council majority instead listen to the mayor who promised the cost could be cut.

Mayor Ashley Swearengin and dozens of orange-shirted supporters urged the city council to accept the $22-and-a-half-million contract to return traffic to the Fulton Mall. "If our team, internally, didn't see a path to clear the 2.5 million dollar gap we would not be here to recommend we award the contract," explained Swearengin.

Opponents argued it was a risky venture because it's 2.5 million over budget. "And unfortunately, this project has all the earmarks of another one of those boondoggles," said Gary Bill, Fresno.

But a majority of the council was willing to take the risk. "There's a lot of synergy and potential, this is an opportunity so I am able to support moving forward," said Esmerelda Soria, city council member.

The vote was 6 to 1 with council member Paul Caprioglio voting no because he felt the council should only vote for a contract if it contains the exact amount budgeted, which was $20 million dollars. "I've been walking and talking to my constituents and they do not support this project," said Caprioglio.