KFSN
SACRAMENTO (KFSN) -- California Gov. Gavin Newsom says the state will be shutting down all state parking lots after videos of groups of people gathered at beaches and parks surfaced over the weekend.

"We need to practice common sense," Newsom said during a briefing update on Monday. He said the move was part of some soft and hard closures on the horizon for the state. He recommended visiting the state park website for the latest details.

During the briefing, Newsom also said that emergency grants have been sent to California cities to provide hotel rooms for the homeless during the COVID-19 outbreak. He added that the state is in need of 17,000 hospital beds as part of California's response to the pandemic.

The state, according to Newsom, is home to 416 hospitals with just shy of 75,000 beds. The pandemic has brought forth the need for an additional 50,000 beds; Newsom says the hospital system has provided 30,000 additional beds and the state has deals for 3,000, but will be looking to find 17,000 more in the coming days and weeks.

He added that California will be "pulling its weight" when it comes to finding and purchasing the medical equipment needed.

Newsom also called for governors across the nation to be collaborative to ensure that purchasing plans are aligned.

Monday's briefing came less than a week after the governor called for a statewide "stay at home" order to combat the COVID-19 outbreak.

The state is not expected to use law enforcement to enforce the order at this time; rather, Newsom said he's counting on "social pressure" and regulatory enforcement to encourage people to follow the order. There is no end date set for the order to be lifted.

In a news conference on Thursday night, Newsom announced the decision amid predictions that about 56% of the state's population - 25.5 million people - could be infected with the novel coronavirus within the next eight weeks if precautions were not taken. Newsom released the "worst-case" predictions in a letter to President Donald Trump.

Newsom added that if 56% of the population were infected, roughly 20% could require hospitalization, and the state could potentially be short on hospital beds. He hopes Thursday's action reduces the number of people requiring hospitalization.

He also called on 500 California National Guard servicemembers to help communities with food bank distributions after seeing a drop in volunteers as the outbreak grows. Blood banks are also in need of blood, and he added it's safe to donate.

California hospitals have roughly 7,500 ventilators, with around 700 more expected to be sent out from state reserves.

The governor also spoke multiple times about "bending the curve" in reference to these precautions keeping the surge of cases in California as low as possible over the coming weeks.

The letter to President Trump, dated March 18, echoes a phone conversation with Trump on Tuesday in which Newsom formally requested that the Navy's USNS Mercy, the largest hospital ship in the world, be deployed to California.

"The acquisition of the Mercy here off the coast of the state of California would provide additional 1,000 bed capacity, provides support for pharmacists and other diagnostic equipment," said Newsom.

"This resource will help decompress the health care delivery system to allow the Los Angeles region to ensure that it has the ability to address critical acute care needs, such as heart attacks and strokes or vehicle accidents, in addition to the rapid rise of COVID-19 cases," Newsom said.

A spokesperson for the governor said the projection shows why it's so critical that Californians take action to slow the spread of the disease - and those mitigation efforts aren't taken into account in those numbers. The spokesperson added that the state is deploying every resource at its disposal to meet this challenge and is continuing to ask for the federal government's assistance in this fight.
Newsom said Wednesday that the state typically received an average of 2,000 unemployment insurance claims a day, but on Tuesday, received 80,000. 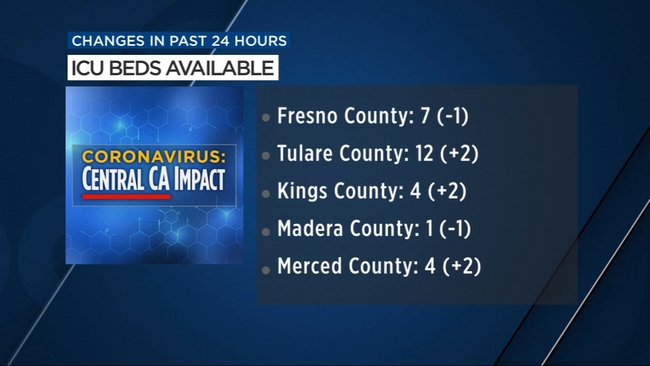 Godiva Chocolates to close all North American stores due to pandemic