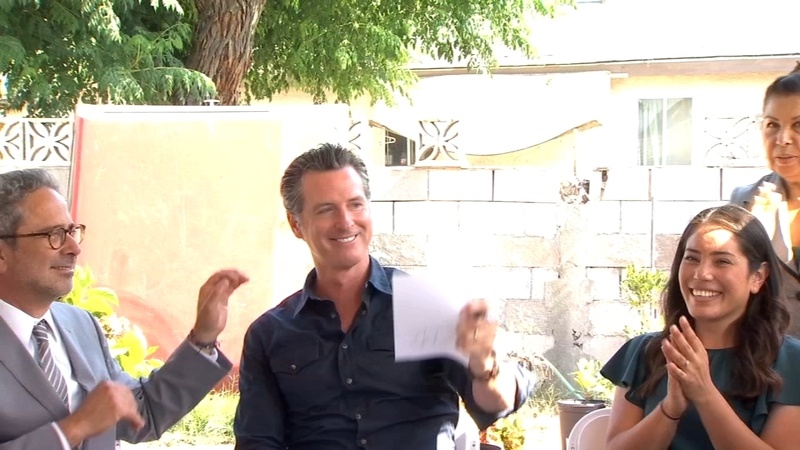 FRESNO, Calif. (KFSN) -- California will set aside more than a billion dollars over the next decade to help about a million residents who do not have access to safe drinking water

Governor Gavin Newsom made a stop in the Central Valley on Wednesday to sign Senate Bill 200, which dedicates the funds necessary to communities dealing with a water crisis.

The visit was a decade in the making.

Local advocates have long been trying to get state and federal leaders to help small communities that are struggling to maintain their water systems.

Many of these systems are not safe to drink and are often contaminated by nitrates from pesticides.

The community of Tombstone sits on the outskirts of Sanger but has struggled for years to provide its residents with safe drinking water.

Many of the 40 or so families who live in the area receive five 8-gallon jugs of water every two weeks through a grant program, but when the water runs out, they run the risk of using contaminated water from the sink to drink and cook with.

The governor spoke with families and listened to their concerns before putting pen to paper on SB 200 - which establishes the Safe and Affordable Drinking Water Fund.

"This is significant. This is over a billion dollars the next decade that will be set aside for a purpose that is noble. The idea that we're living in a state with a million people that don't have access to clean affordable drinking water is a disgrace," Newsom said.

Carolina Garcia has lived in Tombstone for 10 years and called it a surreal moment when the governor set foot in her home to speak about the water crisis.

She hopes his visit will help families like hers who don't have access to safe drinking water.

"It's a lot of emotions...more than happy that he's here and also excited that somebody is noticing the needs of this community," she said.

The new bill will allocate up to $130 million a year to drinking water projects, with the community of Tombstone set to receive an extra million dollars just to hook up to Sanger's water system.