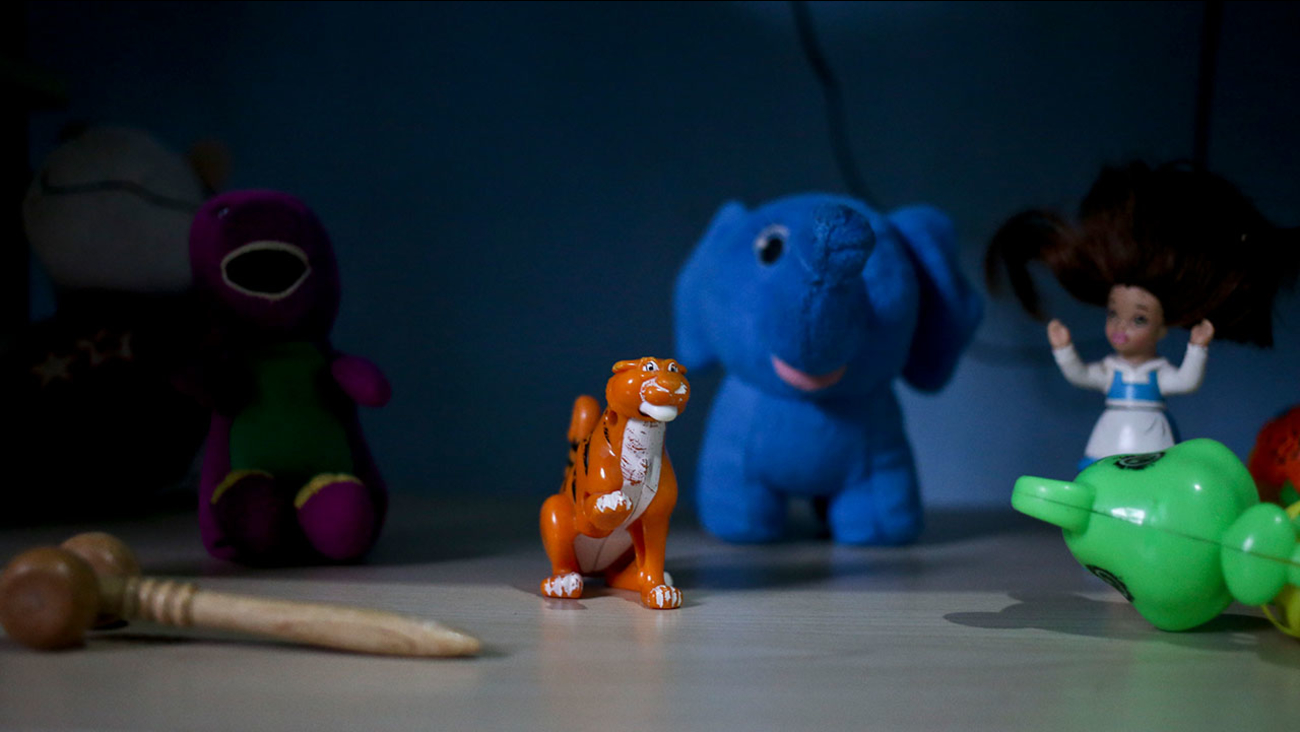 SAN PEDRO SULA, Honduras (AP) -- A year-old boy who became a poster child for the U.S. policy of separating immigrants and their children was back in the arms of his parents Friday, five months after he was taken from his father at the U.S. border.

Johan Bueso Montecinos arrived in San Pedro Sula and was reunited with his parents on a government bus. They were taken away for processing.

And so ended the extraordinary journey of a baby whose short life has ranged from Honduran poverty to a desperate dash across the U.S. border to the front pages of the world's newspapers.

Captured by Border Patrol agents almost instantly upon arrival, Johan's father was deported - and the 10-month-old remained at an Arizona shelter, in the custody of the U.S. government. Over the next five months, he would take his first steps, speak his first words, have his first birthday; his parents, hundreds of miles away, would miss it all.

When his mother and father last saw him, he had two tiny teeth. Now he has a mouthful.

In early July, Johan went before an immigration judge. An Associated Press account of that court appearance - of the judge's befuddlement over how to deal with this tiny detainee in diapers, sucking on a bottle - set off an international furor, embodying the Trump administration's policy of separating immigrant children from their parents.

"I never thought they could be so cruel," said his father, Rolando Antonio Bueso Castillo, 37.

Rolando said he thought his plan was a beautiful one. He would escape his hard life in the tiny town of Libertad - Freedom, in Spanish. His children would not grow up in the same poverty that he had endured - he had dropped out of the fourth grade to sell burritos to help his single mom support him and his four siblings.

His younger brother left the coffee-growing mountains of central Honduras for the United States seven years ago and thrived in Maryland with his wife and children. His sister followed, and also did well. Their eldest brother was killed in a drive-by shooting in San Pedro Sula, one of Latin America's most dangerous cities.

Rolando was left behind with his wife Adalicia Montecinos and his 35-year-old disabled sister in their pink, two-bedroom cement home with a corrugated metal roof. He earned $10 a day driving a bus; his brother in America sent back hundreds of dollars to help out.

Rolando, an easy-going and hard-working man, was well aware of the dangers of crossing Mexico. Scores of Central Americans have fallen to their deaths jumping on trains or been shaken down by Mexican police, murdered, kidnapped, robbed or raped on their way to the United States.

He paid a smuggler $6,000, money his brother sent to him. Everything was supposed to be included - hotel stays, three meals daily and transport in an SUV with two other mothers and three children to the U.S. border. He packed five onesies, three jackets, a blue-and-white baby blanket, lotion, cream, 50 diapers, two bottles and cans of formula.

His wife, in her first trimester of pregnancy, would stay behind, working at her market stand selling Nike baseball hats, "California Dreaming" T-shirts and jewelry. In Maryland, their family would help mind Johan while Rolando worked. Adalicia would join them in a few months.

The father and son made it as far as Tampico, Mexico, 500 kilometers (300 miles) from the Texas border, when their beautiful plan started to unravel.

The smuggler drove them into a warehouse in the port city and told them to board a tractor trailer filled with scores of other parents and children from Honduras, Guatemala, El Salvador and Peru.

Rolando and his son would spend three days locked in the trailer, shivering from the cold breeze from a buzzing machine they were told provided air for them to breathe. Buckets served as bathrooms.

As other children cried, Rolando's son sat next to him quietly, Rolando recalled. They huddled together in the dark; he changed Johan's diapers by the glow of a flashlight.

"We were carried like meat, but we had no choice by then. We had to do what we were told," Rolando said.

In the Mexican border city of Reynosa, they boarded a makeshift raft and floated across the Rio Grande. They trudged through the Texas brush. They had made it.

But minutes later, a Border Patrol agent spotted them. "Where are you going?" the agent asked.

Rolando said his response was simple and sincere: "We're going to search for the American dream."

The agent told him he was taking them to a detention center. Still, Rolando did not doubt his beautiful plan. He figured once he was processed he would be released with his son to fight his case in the courts. At worst, the two would be deported together back to Honduras.

Inside a cell cordoned off by a chain-link fence, they slept on a mattress under a thin, reflective blanket issued to them.

Rolando said he had to ask for three days before being allowed to bathe Johan.

"He was covered with dirt," Rolando said.

On the fifth day, immigration officers told Rolando they needed to take him to an office for questioning. One agent removed Johan from his arms. As they walked away, Johan turned, reaching for his dad.

It would be the last time they would see each other for five months.

The agents told Rolando he was going to be separated from the boy and deported to Honduras because this was the fourth time he had attempted to enter the United States. Each time, he was caught almost immediately.

"That's criminal," one of the agents told Rolando.

"A criminal is someone who kills, robs, does things to harm people," Rolando said later. "I just want to work and give my children opportunities."

Rolando spent 22 days locked up in various detention centers along the Texas border. He knew nothing of his son.

He had no money to call his wife and tell her what had happened. Instead, a social worker from the Arizona shelter holding Johan contacted her and asked if she was Johan's mother. She told her to send his birth certificate and other documents to prove it.

Adalicia could not believe it was true and waited to hear from her husband. Five days later, another detainee lent him money so he could call her.

"What happened to our son?" she asked, crying.

Rolando broke down. "I don't know what happened," he said. "They took him from me. But it'll be OK."

She felt so alone. She would wake up reaching for her baby and remember again what had happened. She watched videos of Johan over and over of him kicking and wiggling, laughing with his dad, staring into the camera.

When Rolando arrived in Honduras in April, he was shocked to see how thin she was - she said she lost 20 pounds and her doctor worried she could lose her baby. The first thing she said when she saw Rolando was "Where's my boy?"

Rolando said he had first been told by immigration authorities that the two would be deported together, so he agreed to go. Then, they told him his son would follow in two weeks. But months passed.

Rolando called lawyers, the Honduran consulate and U.S. authorities to find out when his son was coming home.

The social worker in the United States started sending weekly videos and making video calls. At first, Johan would reach for his mom, as if wanting to embrace her through the screen. But as time passed, he grew distracted.

He is forgetting me, Adalicia thought.

The boy's parents learned he took his first steps from the social worker, who also sent a video of him on his first birthday, waking up and crying. From the AP's news story on Johan's appearance before a judge, they learned that he had started to talk.

"I will never see my son walk for the first time, or celebrate his first birthday," Adalicia said, her voice shaking. "That's what I lost - those memories every mom cherishes and tells their children years later."

At the hearing, Johan repeatedly asked for "agua" - water. At one point, he kicked off his shoes and stood in his socks.

Judge John W. Richardson could hardly contain his unease at having to ask the boy's lawyer whether his client understood the proceedings.

"I'm embarrassed to ask it because I don't know who you would explain it to, unless you think that a 1-year-old could learn immigration law," he told the lawyer.

In the end, Johan was granted a voluntary departure order that would allow the government to fly him to Honduras - back to the pink house with seven chickens pecking in the dirt outside, with the outdoor wood stove and the cement sink filled with water used to flush the toilet.

The father who awaited him Friday was overwhelmed by guilt over the dismal failure of his beautiful plan. Someday, he knows, his son will ask what happened, and why he had left him in the United States.

"I'll tell him the truth," he said. "We thought we had a good plan to give him a better life."

Will Rolando concoct yet another plan to reach America? He says only that he is a fighter and will work hard to survive, as he always has.

But he knows that his life and that of his family will never be the same.

"They broke something in me over there," Rolando said. "This was never my son's fault. Why did he have to be punished?"
Report a correction or typo
Related topics:
politics
Copyright © 2021 by The Associated Press. All Rights Reserved.
TOP STORIES
Mother shot in southwest Fresno 'not intended target,' police say
Body of man missing in Pine Flat Lake recovered
2 seriously injured in car-to-car shooting in Visalia
All of Central CA in 'exceptional drought'
Fresno mayor not ready to impose mask mandate
Calley's Law aims to further protect domestic violence victims
Las Vegas to mask up indoors again after Nevada adopts COVID-19 rule
Show More
USA's Suni Lee wins all-around gold
Pedestrian hit and killed by driver in Porterville
Biden calls on states to offer $100 to those who get vaccinated
Body camera video shows deadly police shooting that led to lawsuit
Woman killed by hit-and-run driver in Fresno County
More TOP STORIES News