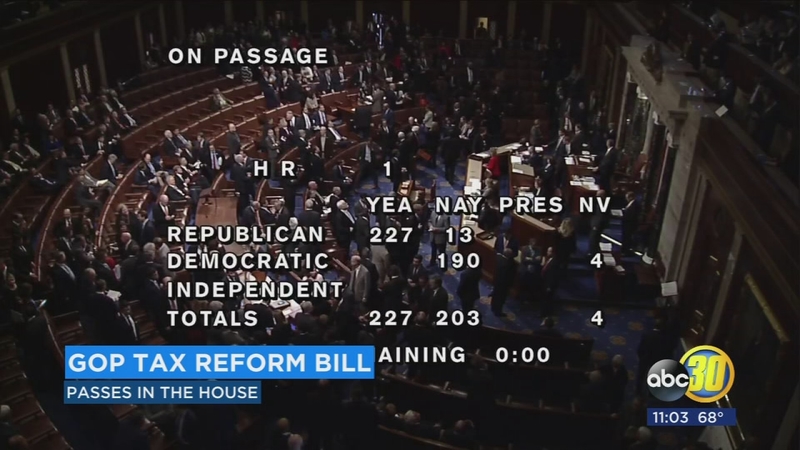 WASHINGTON -- Republicans rammed a near $1.5 trillion package overhauling corporate and personal taxes through the House on Thursday, edging President Donald Trump and the GOP toward their first big legislative triumph in a year in which they and their voters expected much more.

The near party-line 227-205 vote came as Democrats on the other side of the Capitol pointed to new estimates showing the Senate version of the plan would boost future taxes on lower and middle-income Americans. Those projections, coupled with complaints by some GOP senators about their chamber's proposal, suggest party leaders still face a challenge in crafting a measure that can make it through Congress with little if any Democratic support.

House passage raised GOP hopes that Trump would be able to claim a big victory in a year highlighted so far by the Senate crash of the party's effort to repeal President Barack Obama's health care law. The first major tax rewrite in three decades has been a career-long goal of countless Republicans politicians, who tout the reductions as a boon to families, businesses and the entire economy.

"Passing this bill is the single biggest thing we can do to grow the economy, to restore opportunity and help those middle income families who are struggling," said House Speaker Paul Ryan, R-Wis.

Democrats derided the measure as a scheme that would help the rich but do little for anyone else.

"Republicans have brought forth a bill that is pillaging the middle class to pad the pockets of the wealthiest and hand tax breaks to corporations shipping jobs out of America," declared House Minority Leader Nancy Pelosi of California.

Both the House and Senate versions of the legislation would cut the 35 percent corporate tax rate to 20 percent, while reducing some personal taxpayers' rates and erasing and shrinking deductions for individuals. Projected federal deficits would grow by $1.5 trillion over the coming decade.

Shortly before the vote, Trump traveled to the Capitol and urged House Republicans to approve the bill, though it was clear beforehand that they had the votes.

"He told us that we have this once-in-a lifetime opportunity to do something really bold, and he reminded us that is why we seek these offices," Rep. Steve Womack of Arkansas said of Trump's closed-door pep rally.

A small group of House Republicans, largely from New York and New Jersey, rebelled because the House plan would erase tax deductions for state and local income and sales taxes and limit property tax deductions to $10,000.

While House Republicans celebrated, the news was less encouraging for the version making its way through the Senate Finance Committee.

The new numbers from Congress' Joint Committee on Taxation showed that beginning in 2021, many families earning under $30,000 annually would face higher taxes under the Senate package. By 2027, families making less than $75,000 would face tax boosts while those making more would enjoy lower levies.

Republicans attributed the new figures to two Senate provisions. One would end the measure's personal tax cuts starting in 2026, a step GOP leaders took to contain the measure's costs.

The other would abolish the "Obamacare" requirement that people buy health coverage or pay tax penalties.

Eliminating those fines is expected to mean fewer people would obtain federally subsidized policies, and the tax analysts consider a reduction in those subsidies to count as a tax increase. The nonpartisan Congressional Budget Office has projected that would result in 13 million more uninsured people by 2027, making the provision a political risk for some lawmakers.

Republicans on the Finance panel showed no signs of backing down. Sen. John Thune, R-S.D., argued that the same Taxation Committee tables showed that higher earners were still bearing a large share of the overall tax burden.

The figures were released a day after Ron Johnson of Wisconsin became the first Republican senator to say he opposed the GOP bill, complaining that it left taxes too high on some corporations and partnerships.

Besides Johnson, Republican Sens. Susan Collins of Maine, Jeff Flake and John McCain of Arizona, Bob Corker of Tennessee and Lisa Murkowski have yet to commit to backing the tax measure.

Republicans controlling the Senate 52-48 can approve the legislation with just 50 votes, plus tie-breaking support from Vice President Mike Pence. With solid Democratic opposition likely, that means they can lose just two GOP votes - a precarious figure.

The Senate bill would end tax cuts for individuals in 2026, a provision designed to pare the bill's long-term costs to the Treasury - derided by Democrats as a gimmick, Legislation cannot boost budget deficits after 10 years if it is to qualify for Senate procedures barring bill-killing filibusters.

Both bills would nearly double the standard deduction to around $12,000 for individuals and about $24,000 for married couples and dramatically boost the current $1,000 per-child tax credit.

But each plan also would erase the current $4,050 personal exemption and annul or reduce other tax breaks. The House would limit interest deductions to $500,000 in the value of future home mortgages, down from today's $1 million, while the Senate would end deductions for moving expenses and tax preparation.