Judge denies suit against Fresno Co. clerk which would have forced release of rejected ballot names 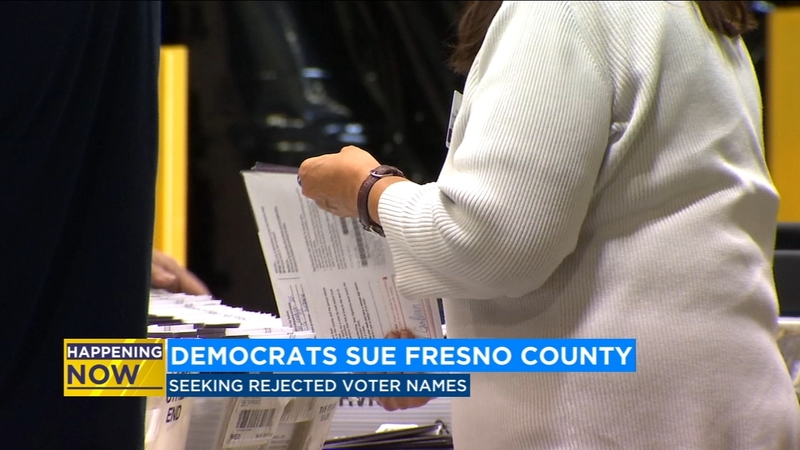 Democrats sue Fresno County to see whose votes got rejected

FRESNO, Calif. (KFSN) -- UPDATE -- Judge Black has denied the TRO against Fresno County which would have forced clerk Brandi Orth to share names and addresses of voterS whose provisional ballots her office rejected.

The judge determined the records are likely not public under Election Code, and said that there seems to be a mechanism for people whose provisional ballots were rejected to fight for their vote to count.

The national Democratic Congressional Campaign Committee is suing Fresno County to find out which ballots the elections office rejected.

They argued in a courtroom Tuesday afternoon, trying to get access to a list of names of people whose provisional ballots were not accepted.

Fresno County is arguing it doesn't have to provide those records because voters' names and addresses are private information. The DCCC says the clerks already use this information, which is how political parties target for mailers.

Following the emergency hearing the judge says he will consider the lawsuit, but has some reading to do before ruling.

Current state law says elections officials are required to let by-mail voters know if their votes got counted and then let them try to fix it if they weren't. They are not required to do the same for provisional voters.

Fresno County is arguing it doesn't have to provide those records.

The DCCC filed a lawsuit yesterday and got a hearing today because it's urgent, especially with only a few hundred votes separating @TJCoxCongress and @RepDavidValadao in #CD21. pic.twitter.com/WDbifaVUhA

The DCCC filed a lawsuit Monday and got a hearing Tuesday because it's considered urgent, especially with only a few hundred votes separating T.J. Cox and David Valadao in Congressional District 21.