AP
By Bill Barrow
Democratic vice presidential nominee Kamala Harris on Thursday plans a speech condemning President Donald Trump, hours before he is set to accept renomination for a second term, for his handling of the coronavirus pandemic.

Harris will detail a "profound failure of leadership" from Trump and highlight proposals by Democratic presidential nominee Joe Biden to control the virus and confront the economic fallout, Biden's campaign told The Associated Press.

With Trump planning an evening address from the White House lawn, Harris' afternoon remarks from Washington will be the Democrats' main counter to the president on the final day of the Republicans' convention.

Biden has made similar arguments about Trump for months and Harris picked up on that criticism in both her introductory speech as Biden's pick and when she accepted the party's nomination last week during the Democratic convention.

On night two of the Republican convention, First Lady Melania Trump made the case for four more years for her husband, and two of Donald Trump's children painted a Joe Biden victory as a disaster for the U.S.

But the California senator's words on Thursday are billed as her most focused denunciation of Trump since joining the ticket. Her tack will test an argument that the former prosecutor tried last summer, as a White House candidate, to show that she is ready to "prosecute the case" against Trump and his "rap sheet."

Harris' address come as she steps up her activity as Biden's running mate. The two have been mostly quiet since the Democrats' virtual convention last week. Harris has been in Washington working virtually with Biden's campaign staff, and on Wednesday was scheduled for three virtual fundraisers and an online discussion focused on Black women in Michigan. Trump narrowly won the state in 2016, in part because turnout among Black Democrats dropped appreciably from 2012.

In a Washington Post op-ed published Wednesday, she detailed the history of women's struggle to gain voting rights, especially women of color who were not granted suffrage even with the passage of the 19th Amendment in 1920. Vice presidential nominees are sometimes seen as designated attackers in a general election campaign, theoretically allowing the presidential nominee to remain above the fray. But that framing is oversimplified in an election between Trump, who relishes attacking his critics in withering terms, and Biden, the former vice president who has pegged his White House to a moral and competency argument against the Republican incumbent. Trump himself offered the main counter to Biden last Thursday before Biden's acceptance speech as the nominee. In a move aimed directly at his Democratic rival, the president traveled to Pennsylvania to greet supporters near Biden's boyhood home, Scranton.

Democrats see Harris as being able to excite Black women and other minority women, but also as a credible messenger to white independents and moderate Republicans unhappy with Trump, especially white college-educated women.

Harris has a reputation on Capitol Hill as a sharp questioner of witnesses during hearings - a skill she memorably wielded against Biden in a primary debate. She drew some criticism last summer, however, for some of her more practiced debate attacks on the president, sometimes laughing awkwardly after their delivery.

"He reminds me of that guy in The Wizard of Oz," she said on the September debate stage. "When you pull back the curtain, it's a really small dude." Trump and his Republican allies have tried to cast Harris as an ultra-liberal helping the far left control the Democratic Party and the more centrist Biden.
Report a correction or typo
Related topics:
politicskamala harris2020 presidential electionpresident donald trumprnc 2020
Copyright © 2020 by The Associated Press. All Rights Reserved.
KAMALA HARRIS 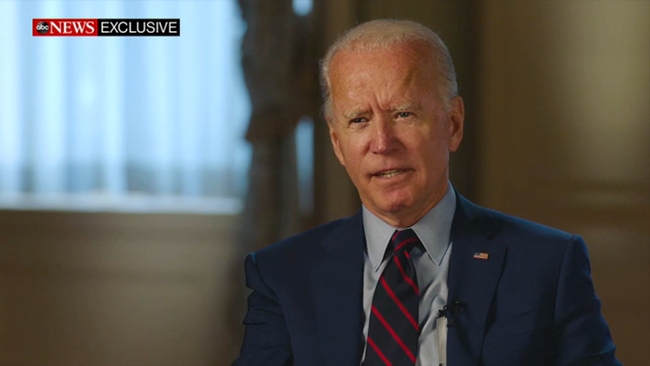