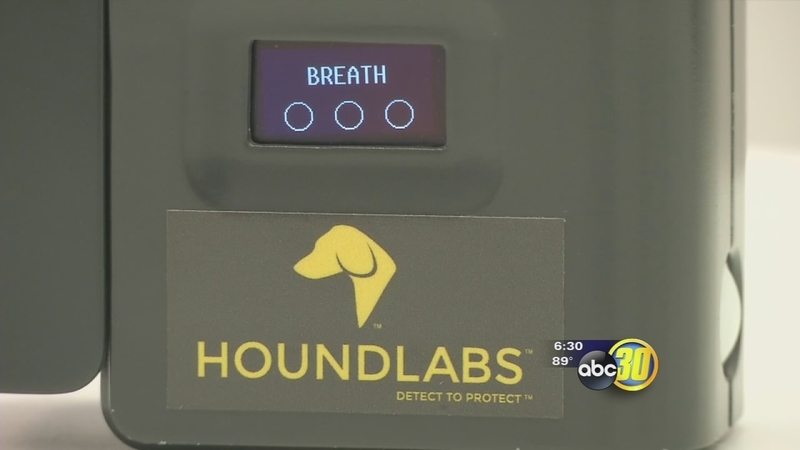 FRESNO, Calif. (KFSN) -- Law enforcement may have a new way to detect drivers under the influence of pot

California voters will soon decide if recreational marijuana use will be legal. Surveys show a majority of Californians support proposition 64, but law enforcement is afraid it will lead to more impaired drivers.

When it comes to catching drunk drivers, a simple breath test can tell if they are over the legal limit-- but when it comes to marijuana, it requires a blood test. As Fresno defense attorney Dan Bacon points out, there's no recognized level or limit that automatically assumes a driver is under the influence of pot.

"You can't base a certain level of marijuana in the blood to presume impairment, and so, that makes it very difficult for the prosecution."

With marijuana legalization looming in California an Oakland company has developed a breathalyzer they claim can detect THC on someone's breath. THC is the psychoactive ingredient in marijuana

"It only picks up people who have smoked in the last two to three hours. You can smoke all day long, all week long, but if you haven't smoked for a few hours, it's not going to be in your breath anymore, and you are probably not impaired at that point," said Mike Lynn, M.D., Hound Labs.

Police in the Bay Area are hoping to put the device to the test. There's a belief driving under the influence of marijuana is a problem.

"Marijuana has become just as strong, if not stronger, of a problem with driving as alcohol," said Sgt. John Bragagnolo, SFPD.

But whether marijuana does impair a person's driving is debatable.

"But there's no studies to back that up. In fact, most studies are in conflict as to even whether marijuana use does impair driving," said Bacon.

Right now, officers who suspect marijuana use have to rely on field sobriety tests and their own judgment to decide if someone is impaired by pot. But, it's tough to make those subjective cases in court.

"They have to prove it on other circumstantial evidence there is no direct evidence," said Bacon.

Whether police use breathalyzers, blood tests, or urine tests to detect marijuana use without an agreed on an illegal level, proving marijuana is a danger will be difficult.