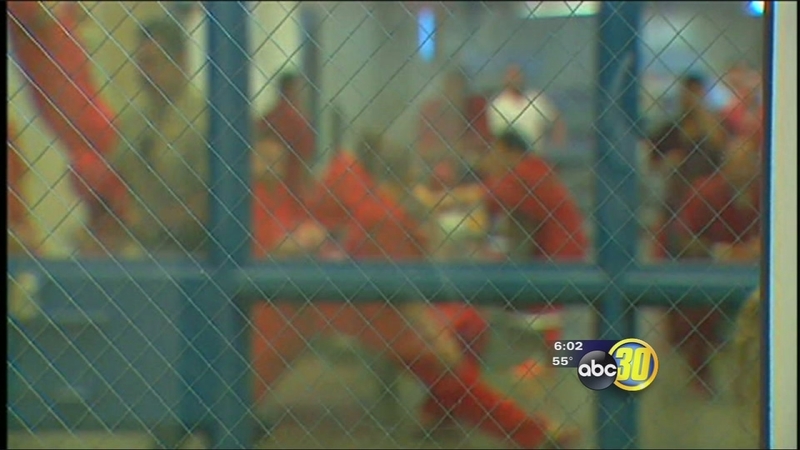 FRESNO, Calif. (KFSN) -- Fresno police want bail amounts for violent re-offenders to be more than $5,000 to $10,000. Only they are finding one group working against them.

Domenek Greenberry is in the Fresno County Jail on two counts of murder but Fresno Police Chief Jerry Dyer said he wouldn't have ever been a murder suspect if he was held on other serious violations over the past year.

Greenberry was arrested twice this summer for being a felon in possession of a firearm, and also twice on domestic violence charges. Three of the four arrests he bailed out once he was released for jail overcrowding. Greenberry is now the poster child for a lobbying effort by Dyer to increase bail fees for those who have a history involving guns and gangs.

"That's going to at least keep them in jail for a period of time to where they don't get out and continue to either, be a suspect in a shooting or a victim in a shooting," said Dyer.

Dyer and other law enforcement leaders have discovered some local bail bondsmen are making it tougher to keep repeat violent offenders locked up. Some companies are offering bailouts at one-percent, instead of the typical 8 to 10-percent.

"The reason that bail bondsman are doing this-- much of it has to do with the fact that AB109 and Proposition 47 reduced the number of people being put into jail," explained Dyer.

But Barry Pearlstein, owner of Lucky Bail Bonds, said increasing fees for freedom isn't going to change behavior. "So at the end of the day, increasing bail schedules is not going to stop repeat offenders from offending."

Right now, Dyer says many felons caught with guns are typically getting bail schedules of 10 to $15,000. Pearlstein said, even if judges raised bail amounts to $50,000, $100,000, or no bail, it wouldn't necessarily stop offenders from getting out of jail.

"Why don't we just make it no bail? We can set it at no bail and we can lock these guys up. But, I will tell you this, at some point they will meet an overcrowding release objective, based on a federal overcrowding order, and they are going to hit the streets without any requirement to appear but their signature on a paper."

Dyer has been meeting with the presiding judge and the District Attorneys office to talk about ways to maximize enhancements and increase bail amounts. But it's a challenge, and also when inmates are still being released due to overcrowding.