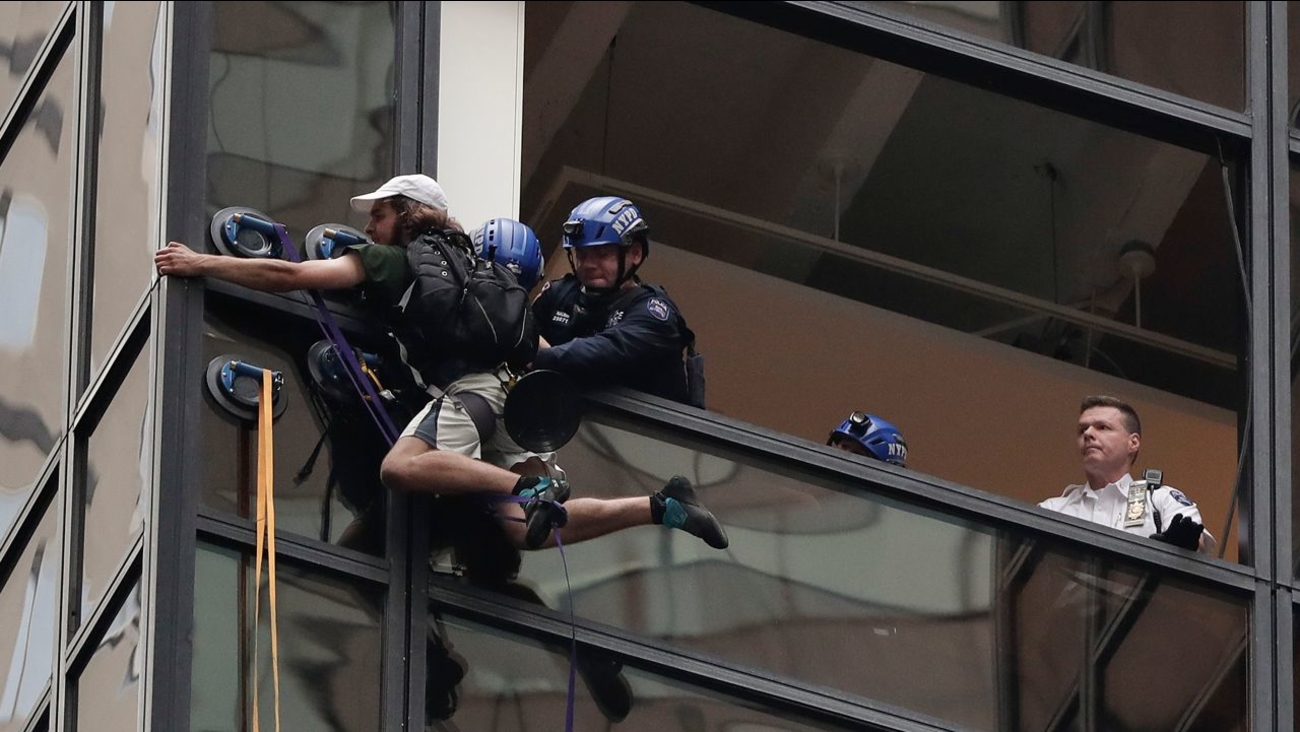 New York Police officers struggle as they pull a man through a window as he scaled the east side of Trump Tower using suction cups, Wednesday, Aug. 10, 2016, in New York. (AP Photo/Julie Jacobson)

MIDTOWN, Manhattan -- A man used suction cups to climb the south side of the Trump Tower building in Manhattan on Wednesday, evading police for hours before his arrest.

NYPD Emergency Service officers removed an entire window from the building and grabbed hold of the man and pulled him inside just after 6:30 p.m. -- more than 2 1/2 hours after he was first spotted.

Watch as the NYPD pulls the Trump Tower climber into the building.

The shaggy brown haired young man was on the East 56th Street side, the south side of the building, and made it to the 21st floor before he was captured.

One witness said the man began his climb when he was standing on the sub roof garden, which is accessible to the public.

He then started climbing, using a contraption made up of suction cups. He used four, one each for his arms and legs, and had a spare strapped to his black backpack.

Here are photos showing the climber:

In his limited communication with police, the man was identified only as Steve, from Virginia. It is also believed that he posted a video to YouTube on Tuesday detailing his plan and motivation.

The climber had been moving left and right and making very slow progress upward, due to the efforts of the police and FDNY.

An Eyewitness News viewer was one of the first to spot the climber, and he shot this video:

@ABC there is a man scaling Trump Towers with cops watching pic.twitter.com/JbW6EjAIxM

Emergency Services workers cut holes through grates in the building, hoping to intercept the climber. When that proved ineffective, they started breaking windows and lowering a window washer scaffolding towards the man.

Police did not want to grab at the man until they were absolutely certain they could secure him out of concern for his safety. They were not concerned that he had any type of weapon in his backpack - that was due both to the way he was acting and NYPD radiation and explosive detectors not picking up a signal. Cops were close enough to talk to him and stay in communication the entire time thanks to windows they had broken.

While climbing, the man could be seen smiling and continuing to clean the glass and apply his suction cups as he made his slow climb up the tower.

The NYPD had set up barricades around the area and blocked off nearby streets.

Police also set up airbags on the street and on the sub roof garden in case the man lost his grip and fell. Fortunately, those were not needed and they brought him inside the building safely.

"This man performed a ridiculous and dangerous stunt," Michael Cohen, an executive Vice President in the Trump organization and his legal council, said in a statement. "There's damage to the building and he caused the unnecessary deployment of New York's Finest to protect his safety and the safety of everyone in the building. He's caused the shutdown of traffic on Fifth Avenue. I'm 100 percent certain the NYPD had better things to do. If Mr. Trump were here he'd be thanking law enforcement for the job they're doing."
Related topics:
politicsnew yorkdonald trumpnypdrescuetrump toweru.s. & world
Copyright © 2021 WABC-TV. All Rights Reserved.
RELATED
Who is 'Steve from Virginia' the Trump Tower climber?
U.S. & WORLD
Saturn will glow brightly in the sky next week: How to see it
Federal eviction ban expires after Biden, Congress fail to extend it
Mom who gave birth to 9 thriving babies at same time speaks out
Jill Biden gets medical procedure on foot after Hawaii visit
TOP STORIES
3 killed in multi-vehicle crash in Tulare County
Police investigating deadly shooting in southeast Fresno
Fresno's Tower District gets biggest makeover in 60 years
Man killed, 16-year-old boy injured in Fresno County homicide
Bacon may disappear in California as pig rules take effect
Miss Winkles Pet Adoption Center reopens after 16 months
Driver, 2 passengers killed after car slams into tree near Caruthers
Show More
Mudslides force more than 100 to spend night on highway
Fresno's Boy Scouts go to camp
Woman hit and killed on Highway 99 in Fresno area
Federal eviction ban expires after Biden, Congress fail to extend it
Pedestrian hit and killed on Madera roadway
More TOP STORIES News