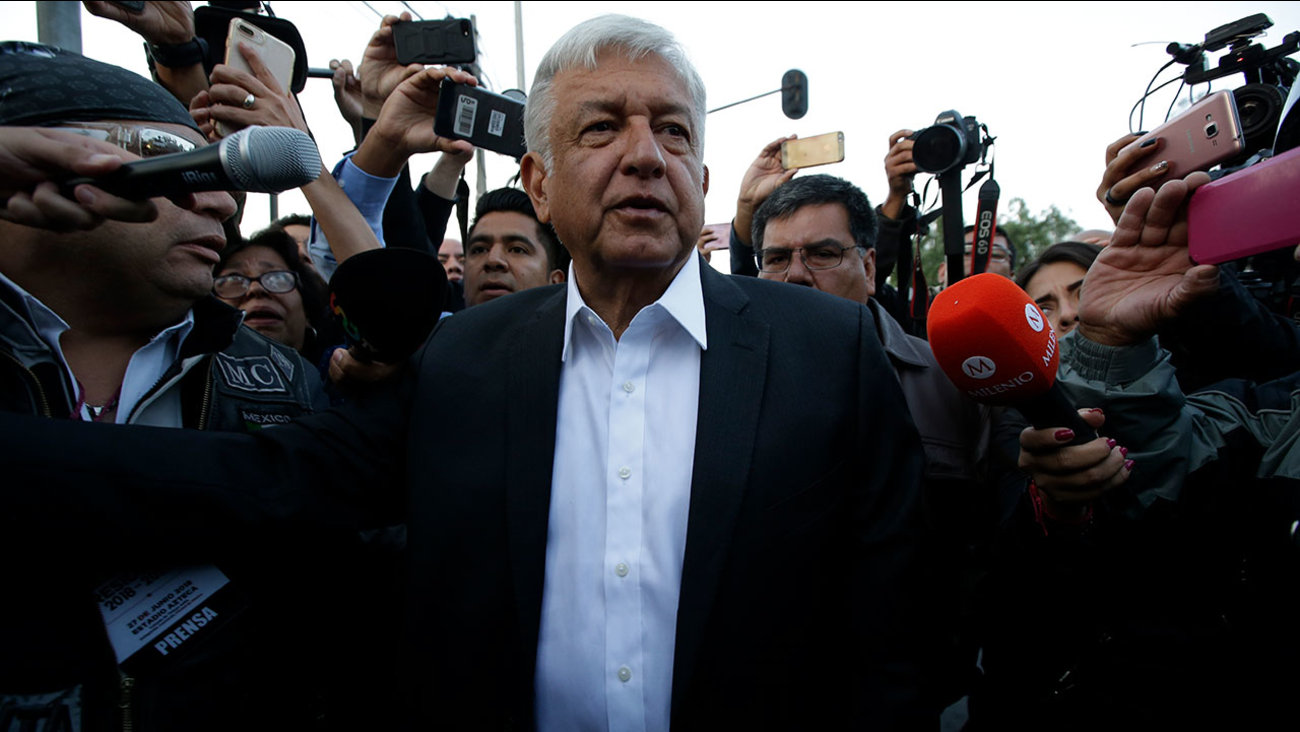 MEXICO CITY (AP) (KFSN) -- Furious at spiraling corruption and violence, Mexican voters appeared to have unleashed a political earthquake Sunday by electing a leftist firebrand and giving him a broad mandate to overthrow the political establishment and govern for the poor.

A prominent exit poll gave populist Andres Manuel Lopez Obrador a 16 to 26 point lead over his nearest rivals, who conceded even before official results were released by the National Electoral Institute. And his party allies were predicted to have huge wins in the Senate and lower house, possibly absolute majorities in both.

Lopez Obrador, who vowed to transform Mexico and oust the "mafia of power" ruling the country, rode widespread voter anger and discontent with the governing Institutional Revolution Party, or PRI, of President Enrique Pena Nieto and had led opinion polls since the beginning of the campaign.

"The tendency favors Andres Manuel Lopez Obrador. ... I recognize his triumph," Anaya said in a speech to supporters.

"For the good of Mexico, I wish him the greatest success," Meade said minutes earlier.

Lopez Obrador waved to supporters from a balcony of his campaign headquarters and then left in a motorcade for the center of the capital.

Supporters began wild celebrations in Mexico City, cruising up and down the central Paseo de la Reforma boulevard honking horns to the tune of "Viva Mexico!" and waving Mexican flags from car windows and moon roofs.

Thousands poured into the sprawling main square known as the Zocalo, where the 64-year-old former mayor had called on his backers to rally Sunday night. Many danced to the trills of mariachi music.

Retired teacher Susana Zuniga beamed and said the country was experiencing a moment similar to the Mexican Revolution a century ago.

"The people are fed up," Zuniga said. "That is what brought us to this."

U.S. President Donald Trump tweeted congratulations: "I look very much forward to working with him. There is much to be done that will benefit both the United States and Mexico!"

Exit polling by Consulta Mitofsky for the Televisa network forecast gubernatorial wins for allies of Lopez Obrador's Morena party in at least four of eight state races on the ballot plus for the head of government in Mexico City. The central state of Guanajuato was expected to go to a candidate of the conservative National Action Party.

Mitofsky predicted Morena allies would take between 56 and 70 seats in the 100-member senate and between 256 and 291 spots in the 500-seat lower house.

Lopez Obrador, commonly known by his initials, "AMLO," was making his third bid for the country's highest office, having falling short in the 2006 and 2012 elections.

In 2006, rivals convinced voters that his populist message was "a danger for Mexico." In 2012, voters restored the long-dominant PRI to power in hopes that it could cut back-room deals to tamp down rising violence.

But after six years under Pena Nieto, that hasn't been the case.

So deep is Mexicans' discontent with the status quo that not only Lopez Obrador but Anaya, Meade and independent candidate Jaime "El Bronco" Rodriguez all claimed to be the ones representing real change.

In the end, Lopez Obrador's rants against the "mafia of power" rang most authentic.

"The anger that the average Mexican feels toward the way things are being governed has favored Lopez Obrador," said Shannon O'Neil, senior fellow for Latin America Studies at the Council on Foreign Relations. "He's been able to capture the mantle of the person who's on the outside who wants change."

After 12 years of near-permanent campaigning, Lopez Obrador moderated his message somewhat in both substance and style. He said he will govern for the poor and fight rampant corruption, and also pulled back from promises to completely scrap energy and education reforms instituted by the Pena Nieto administration.

He also pledged to increase support payments for the elderly and to give scholarships or paid apprenticeships to young people.

"Now that he has won, he cannot fail this new generation that believes in him," said Mariano Bartolini, a 29-year-old lawyer who voted for Lopez Obrador in the northwestern city of Tijuana, across the border from San Diego. "It is thanks to us young people who are supporting him that he was able to get more votes than he did in past elections."

Lopez Obrador's rivals argued he could set the country back decades and lead to disaster with an interventionist economic policy.

"I am concerned that some candidates are making proposals that are impossible, because they're very expensive to carry out," said Juan Carlos Limas, 26, an Anaya supporter.

Casting his own vote Sunday, Pena Nieto promised to work on the transition with whoever won.

"The president of the republic and his government will be absolutely respectful and support the authorities that are elected," the president told reporters.

Sunday's elections for posts at every level of government were Mexico's largest ever and became a referendum on corruption, graft and other tricks used to divert taxpayer money to officials' pockets.

Much ire was aimed at the PRI, whose market-oriented economic reforms have yet to benefit many in a country where about half the population is poor. Meade struggled during the campaign to escape discontent with the party, even though he was never a member until it tapped him as an "outsider" candidate.

Anaya tried to harness the youth vote with an emphasis on technology and new ideas, but he divided his own conservative party to take its candidacy and there were doubts his new allies in the leftist Democratic Revolution Party would turn out for someone from the other end of the ideological spectrum.

Sunday was the first time that an independent candidate appeared on the ballot.

It was also the first time Mexicans living abroad were able to vote for down-ballot races like senators. More than 181,000 received ballots and the 97,000 that the National Electoral Institute had gotten back by Friday morning were already double the number received in 2012.