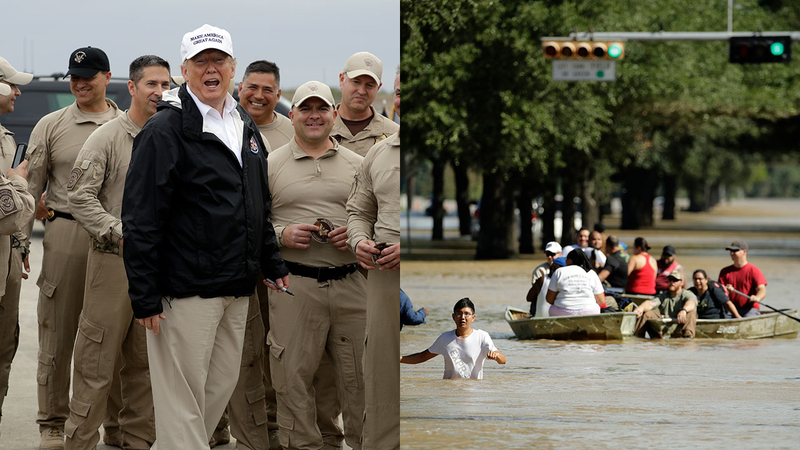 WASHINGTON, D.C. -- The White House is directing the Army Corps of Engineers to find money within its own budget to fund President Trump's border wall under a national emergency declaration, including money earmarked for Hurricane Harvey relief.

Sources familiar with the matter tell ABC News the White House specifically asked the Corps to examine what funds could be redirected to the border wall from a $13.9 billion emergency supplemental designed to fund more than 50 disaster relief projects in California, Florida, Texas and Puerto Rico.

A U.S. official told ABC News the money could be used to build as much as 315 miles of border wall, under the direction of the Army Corps of Engineers.

News came as President Trump made a visit to the border between the U.S. and Mexico at McAllen, Texas, where he met with state officials.

The president used the visit to draw further attention to his case after negotiations with lawmakers on Capitol Hill imploded at the White House on Wednesday.

As of Thursday, the president said he has yet to decide on whether to declare an emergency, but that it remains under strong consideration.

We reached out to the Harris County Flood Control District, which said it would not be commenting Thursday night. The White House and the Corps are also not commenting.

Thursday night, Woodlands Rep. Kevin Brady tweeted that he had talked to the White House and called reports that Harvey funds could be used to fund the wall "Absolutely not true."

I’ve spoken directly with the White House. Absolutely not true.
.@realDonaldTrump committed to border security/ will not back down until adequate $$ are secured. Fully supports Corps funding to help Harvey communities rebuild/prevent future flooding. https://t.co/drYkYP9Y6K

The possible spending plan was reported by ABC News, NBC, CNN, Fox, The Washington Post, the Wall Street Journal and others.

Newly inaugurated Harris County Judge Lina Hidalgo told ABC13, "This shouldn't even be a possibility." Hidalgo learned of it from news reports and said if implemented, it would affect long awaited projects to widen and deepen Clear Creek, Hunting Bayou, Brays Bayou and White Oak Bayou.

She added, "These communities have been promised this work."