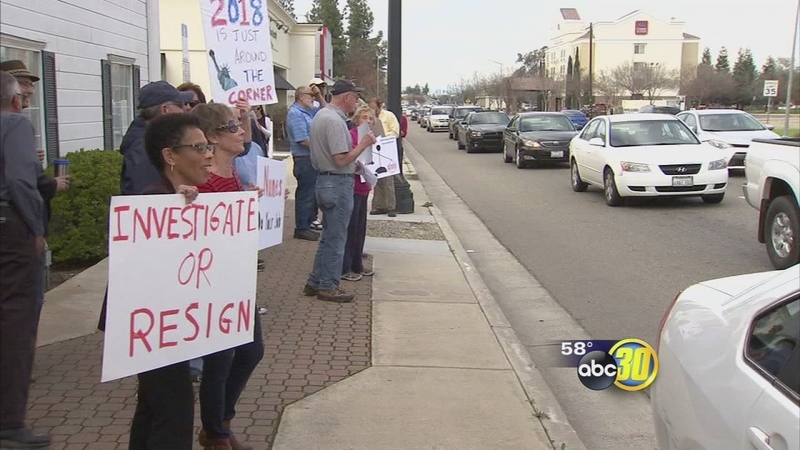 In front of Congressman Devin Nunes' Clovis office Wednesday Derby stood alongside other protesters. And for as long as it takes he's going to be there every Tuesday around noon to silently resist.

"We're going to stand in silent protest; peaceful, reflective, situation in which other people will have another alternative to protest."

The protesters were there on this day because of former National Security Advisor Michael Flynn and his alleged ties to Russia. He's accused of contacting a Russian diplomat by phone in late December.

As chairman of the House Intelligence Committee Nunes says his focus is on finding who is leaking that classified information to the public. The protesters say he should be investigating General Flynn instead.

"We feel that he is putting the administration and the political party in front of the safety of the American citizens," said Kate Connor, Courage Campaign.

Nunes was supportive of the protest saying, in part, "It's always gratifying to see people expressing their opinions on political issues, whether they support me or not."

It is not the first time protesters have taken to the sidewalk in front of Nunes' satellite office. Dozens of people showed up earlier this month objecting to his stance on immigration. And in front of his Visalia office Wednesday morning a dozen more brought Valentine's Day cards to his staff. Their hope is the message gets to Nunes-- preferably face to face.

"We'd love to have a town hall, and talk about some really important relevant issues that are affecting constituents, affecting people of Tulare County and Fresno County," said Wagner.

Until that day comes, at least one man says he won't stop challenging his elected official.