KFSN
By Brian Johnson
Fresno, Calif. (KFSN) -- There were a few tense moments at the Wednesday morning meeting of the Tulare Public Cemetery District.

"You guys had years, years!" one woman in the audience shouted. "(The Facebook group) Caring Cause stepped up and look what's happening, it's moving."

Caring Cause is a Facebook group with more than 1,000 members. Elaine Hollingsworth started it and believes the cemeteries are in a deplorable state, due to neglect and mismanagement.

"Dead lawn, sinking graves, broken and chipped grave markers," Hollingsworth said during the public comment portion of the board meeting. Several board members have recently resigned, and the two on-site managers have announced their retirements. Some showed up to Wednesday's meeting to defend the work they did.

"They left feeling harassed and bullied," Allyson Viera said. "My husband (a groundskeeper) has been harassed by the new board members that are here."

But new board members say those claims are not true and hope to make some serious improvements moving forward.

Alberto Aguilar was appointed to the board on Tuesday. Phillip Deal and Vicki Gilson became board members earlier this year.

"I've received many personal stories since I've been involved in the board these last three or four months about people being buried the wrong places, being absolutely rude to people when they came in, not caring, not compassionate," Gilson said.
One man who spoke at Wednesday's meeting says the old management made excuses for burying his father in the wrong place. Meanwhile, the board still has two vacancies.

Tulare County Supervisor Pete Vander Poel is tasked with reviewing the applications and making the appointments. He says some of the cemetery issues aren't anyone's fault-the drought took a toll on cemetery grounds, and the cemetery suffers when someone chooses cremation over a burial.

"I see my role in the function of the Tulare Cemetery in making sure that vacancies are filled, that there are people serving on that board who have the best interests of the entity at their heart," Vander Poel said. Suspect named in killing of 3 Perris men found in cemetery 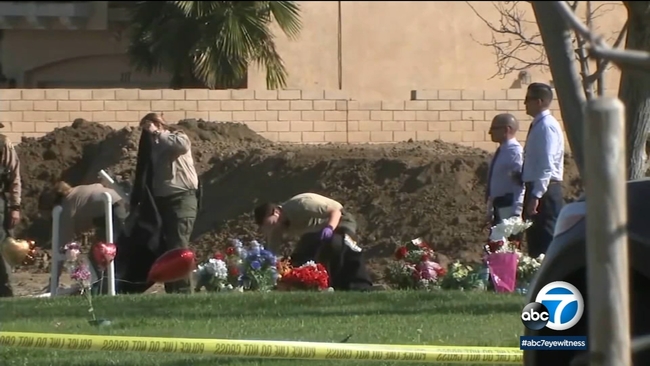