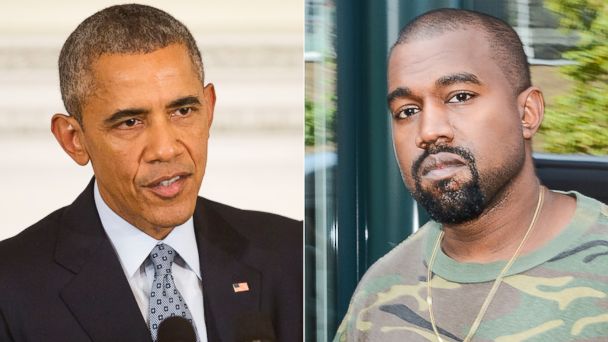 Kanye West for the White House in 2020 strikes President Barack Obama as "strange," even "cray."

But Obama playfully told a crowd of Democratic donors in San Francisco Sunday at a fundraiser headlined by West that he has some important advice to share with the would-be candidate.

"Kanye is thinking about running... for Speaker of the House!" Obama joked, alluding to the recent upheaval on Capitol Hill. "It couldn't get any stranger. But in case Kanye is serious about this whole POTUS thing -- or as he calls it, 'peezy' -- I do have some advice for him."

"First of all, you have to spend some time dealing with some strange characters who act like they're on a reality TV show. You gotta be cool with that," Obama said.

"And number three: Do you really think this country's going to elect a black guy from the South Side of Chicago with a funny name to be president of the U.S.? That's crazy. Cray."

Both Obama and West hail from Chicago's south side.

The president spoke before 1,300 benefactors to the Democratic National Committee at the Warfield Theater. Kanye West was listed as a performer. Members of the NBA champion Golden State Warriors also shared the stage. West's wife and reality TV star Kim Kardashian was spotted in the crowd.

Tickets to the function ranged between $250 and $10,000 per person, according to a DNC official.

Obama stopped short of endorsing West, which is not entirely surprising.

After all, the president has called West a "jack---" twice: first in 2009 after West interrupted Taylor Swift's acceptance speech at the VMAs, then again in a 2012 interview with The Atlantic.

Today Obama reserved the criticism for the 2016 Republican presidential field.

"Why are so many Republican politicians down on America? Why are they so grumpy?" Obama quipped of broadsides against the state of the economy and his presidency.

As for his exit from office in 14 months, Obama told the crowd he is looking forward to being an "ordinary citizen" again.

"I won't have elected office, but it doesn't mean I'll stop working on these issues," he said.