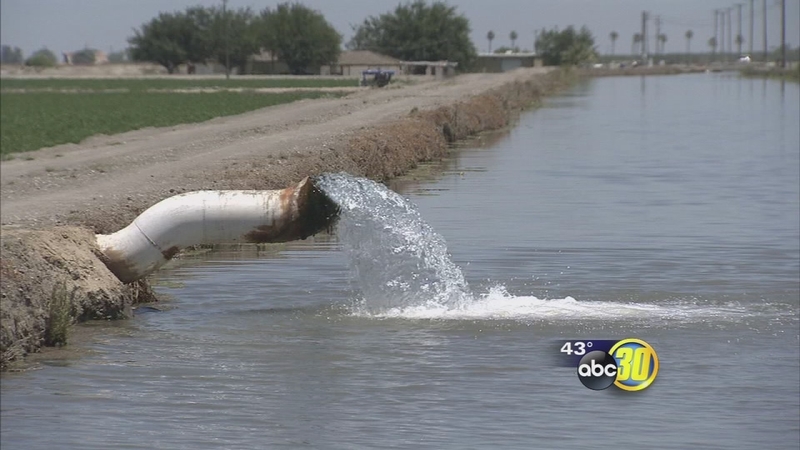 FRESNO, Calif. (KFSN) -- With each passing year of drought, another field across the Westlands Water District turns fallow. Paul Betancourt has survived six grueling years, worried how much longer the wells will support his 700 plus acres.

This year the district only received a five-percent federal allocation. The newly signed water infrastructure bill will hopefully boost those numbers.

The law allows federal agencies to pump more water during big storms and wet years. It comes at the right time just as the Valley heads into the rainy season.

"Right now the precipitation season is occurring as we speak, really this is going to help try to capture some of the flows that are existing simply because of those large storms coming through this time of year," said Ryan Jacobsen, CEO of Fresno County Farm Bureau.

The bill passed with bi-partisan support but the president cautioned that pumping must obey the endangered species act.

"I appreciate Senator Boxer's comments about, she's concerned about fishermen's families up in the north coast, but we've gotten creamed down here," said Betancourt.

Friday's achievement took years of congressional approval and growers said they remain cautiously optimistic. Unsure how much this bill will exactly help the Valley.

"We still have an allocation that's based on what exists from mother natural. It's hard to say if this means 10-percent, 20-percent more water we don't know at this point. We do know that it is better than the current system that we're under," said Jacobsen.

It has the potential to turn some these fallow lands into productive fields ripe with jobs again.

"I think the pendulum has swung one way for a long time and hopefully it's swinging back to some common sense now," said Betancourt.

Growers said this is just temporary help as the bill only provides short term relief lasting up to five years.

The White House released the following statement after the president's signing:

Today I am signing the Water Infrastructure Improvements for the Nation (WIIN) Act into law. It authorizes vital water projects across the country to restore watersheds, improve waterways and flood control, and improve drinking water infrastructure. The law also authorizes $170 million for communities facing drinking water emergencies, including funding for Flint, Michigan, to recover from the lead contamination in its drinking water system. That help for Flint is a priority of this Administration. WINN also includes four Indian water rights settlements that resolve long-standing claims to water and the conflicts surrounding those claims, address the needs of Native Communities, fulfill the Federal trust responsibility to American Indians, and provide a sound base for greater economic development for both the affected tribes and their non-Indian neighbors.

Title III, Subtitle J, of the law has both short-term and long-term provisions related to addressing the continuing drought in California. In the long-term, it invests in a number of water projects to promote water storage and supply, flood control, desalination, and water recycling. These projects will help assure that California is more resilient in the face of growing water demands and drought-based uncertainty.

Title III, Subtitle J, also includes short term provisions governing operations of the federal and state water projects under the Endangered Species Act for up to five years, regardless of drought condition. Building on the work of previous Administrations, my Administration has worked closely with the State of California and other affected parties to address the critical elements of California's complex water challenges by accommodating the needs and concerns of California water users and the important species that depend on that same water. This important partnership has helped us achieve a careful balance based on existing state and federal law. It is essential that it not be undermined by anyone who seeks to override that balance by misstating or incorrectly reading the provisions of Subtitle J. Consistent with the legislative history supporting these provisions, I interpret and understand Subtitle J to require continued application and implementation of the Endangered Species Act, consistent with the close and cooperative work of federal agencies with the State of California to assure that state water quality standards are met. This reading of the short-term operational provisions carries out the letter and spirit of the law and is essential for continuing the cooperation and commitment to accommodating the full range of complex and important interests in matters related to California water.
Related topics:
politicscalifornia watercaliforniadrought
Copyright © 2021 KFSN-TV. All Rights Reserved.
RELATED
Valley farmers welcome passage of water relief bill
House approves bill on Calif. drought, Flint water
CALIFORNIA
Sierra Nevada red fox to be listed as endangered
California unemployment crisis: Calamity at the EDD
CA to require vaccination or testing for state workers
Newsom visits Central CA, launches effort for high-speed internet
TOP STORIES
New Fresno police operation designed to curb violence
CDC issues new eviction ban for most of US through Oct. 3
Domestic violence suspect arrested after hours-long standoff in Fresno
Valley healthcare facilities feel effects of Delta variant's spread
Woodville murder suspect dies after being shot by deputies
Deadly weekend has Fresno police ready to change tactics
Nelly, Young the Giant, Midland coming to Big Fresno Fair this year
Show More
'Magic Key': Disneyland unveils new program to replace annual passes
Officer dead after burst of violence outside Pentagon
Biden chides Republican governors who resist vaccine rules
NY Gov. Cuomo sexually harassed multiple women: Probe
2-year-old boy injured in car-to-car shooting in Fresno, police say
More TOP STORIES News