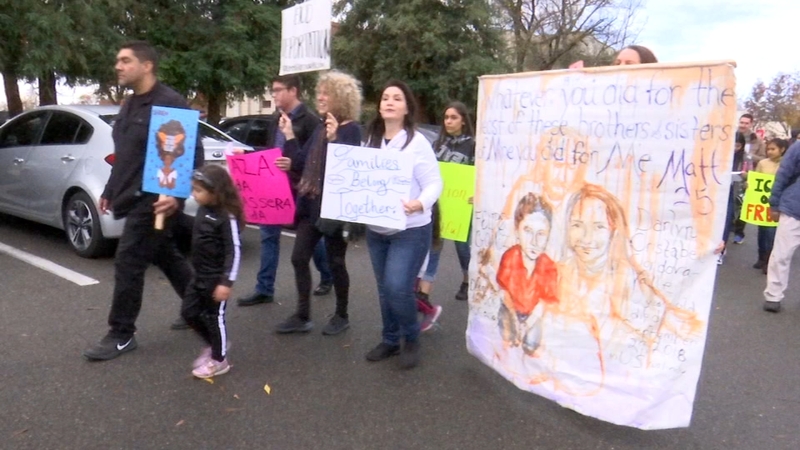 FRESNO, Calif. (KFSN) -- Dozens of people rallied around an undocumented Fresno man and his family following his release from Immigration and Customs Enforcement, or ICE.

Sandra Hernandez is helping lead this march through northeast Fresno.

Her dad Hugo Hernandez was arrested by ICE officers back in November.

He was taking his kids to school when ICE Officers pulled him over.

Hernandez wasn't sure why he was being arrested.

Part of the incident was caught on camera by his daughter in this video.

According to his lawyer Linda Barreto, he tried to exercise his rights.

"The ICE officer in response said, 'I don't care about that', and then goes on to reach into the car and unlock the car to forcefully pull him out," says Barreto.

Hernandez was recently released after posting bond which was only $4,500.

Barreto is trying to figure out why exactly he was arrested.

"There is nothing in the documents that allege that Hugo is an enforcement priority or a threat to our community," she says.

He is going to continue fighting to stay here.

Hernandez is glad to be back with his family.

"I'm so happy I can't even really describe the feeling that I feel. I'm just so grateful and I feel happy to be with them again. I didn't expect to be able to ever see them again," says Hernandez.