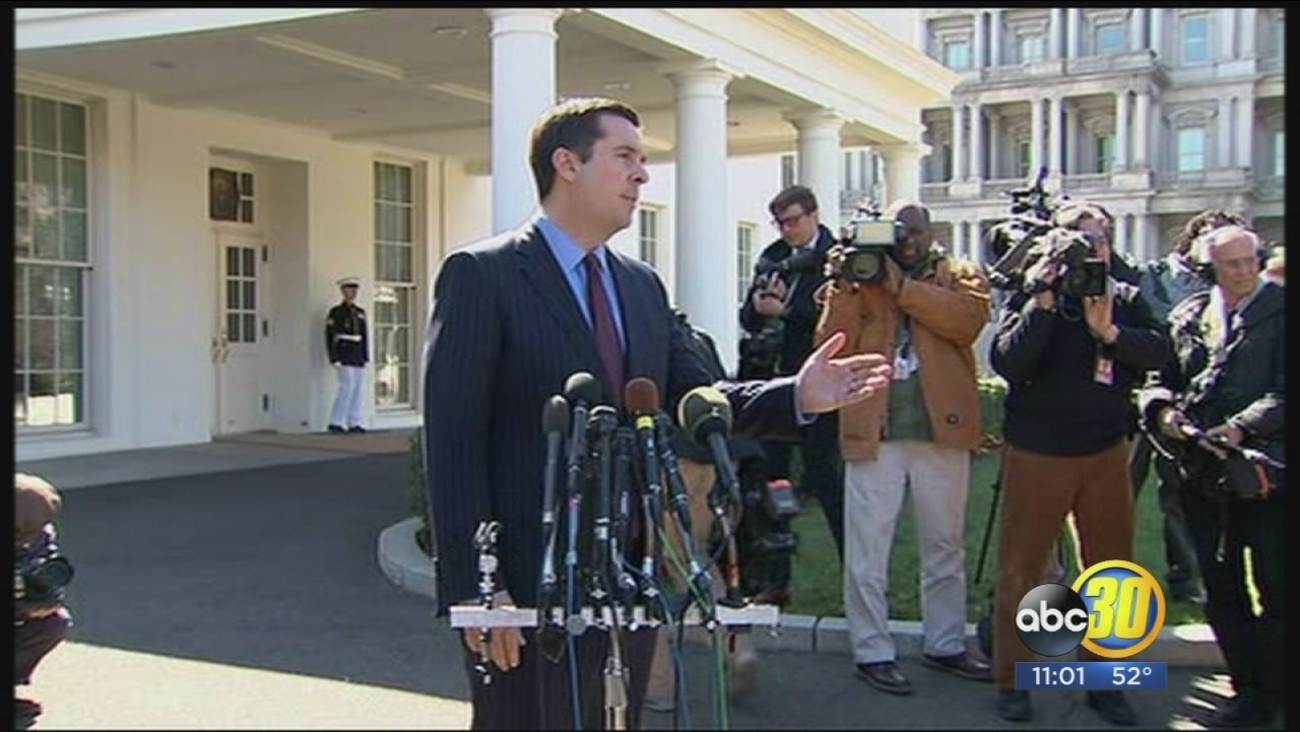 Claims that President Donald Trump and his team were under surveillance now back in the spotlight with new evidence. (KFSN)

WASHINGTON -- The House intelligence committee chairman privately apologized to his Democratic colleagues on Thursday, yet publicly defended his decision to openly discuss and brief President Donald Trump on typically secret intercepts that he says swept up communications of the president's transition team.

GOP Rep. Devin Nunes' decision to disclose the information before talking to committee members outraged Democrats and raised questions about the independence of the panel's probe of Russian interference into the 2016 election and possible contacts between Trump associates and Russia.

A congressional aide familiar with Nunes' meeting said the chairman apologized to Democrats and pledged to work with them and share information related to the investigation.

"A credible investigation cannot be conducted this way," said Rep. Adam Schiff, the top Democrat on the House panel.

Nunes' critics also questioned whether the California congressman was coordinating with the White House in order to give the president cover for his explosive claims that Barack Obama wire tapped Trump's New York skyscraper.

Nunes, who served on Trump's transition team, ducked questions about whether he was parroting information given to him by the White House, saying only that he was "not going to ever reveal sources." He maintained that Trump's explosive wiretapping allegations against Obama were false.

Rep. Jackie Speier, D-Calif., said Nunes apologized to the minority members of the committee. She told reporters on Capitol Hill that she doesn't know where the information came from, but recalled a comment Trump made in a Fox News interview earlier this month where he said the White House "will be submitting things before the committee very soon that hasn't been submitted as of yet."

The disclosure came two days after FBI Director James Comey publicly confirmed the bureau's own investigation into the Trump campaign's connections with Russia. Comey's comments came during the intelligence committee's first public hearing on Russia's election interference, an investigation being overseen by Nunes.

Nunes said he received the new intelligence information after that hearing. He said it revealed that Trump's transition associates - and perhaps Trump himself - had their communications picked up through legal surveillance.

The surveillance was conducted legally, Nunes said, and did not appear to be related to the FBI's Russia investigation. He said his concern was that the identities of the Trump officials were improperly revealed and the contents of their communications were "widely disseminated" in intelligence reports.

Speaking to reporters outside the White House, Nunes said, "What I've read bothers me, and I think it should bother the president himself and his team."

Nunes briefed reporters on the new information without consulting with Schiff or other Democrats on the committee.

Rep. Jackie Speier, D-Calif., said Nunes' disclosure could be a "weapon of mass distraction" in light of allegations of coordination between Russians and the Trump campaign during the 2016 campaign against Democrat Hillary Clinton.

"This could be a lot of theatrics," said Speier, also a member of the House intelligence committee.

"This is a bizarre situation," Sen. John McCain, R-Ariz., said in an interview on MSNBC. "I'm calling for a select committee because I think this back-and-forth shows that Congress no longer has the credibility to handle this alone."

Later, in an interview with MSNBC, Schiff said evidence "that is not circumstantial and is very much worthy of an investigation" exists of Trump associates colluding with Russia as it interfered in last year's election. He did not outline that evidence.

Schiff disputed Nunes' suggestions that there was improper "unmasking." He said that after speaking with Nunes, it appeared that the names of Americans were still guarded in the intercepts though their identities could be gleaned from the materials.

Obama administration officials disputed the suggestion that the outgoing administration was improperly monitoring its successors. Ned Price, who served as spokesman for Obama's National Security Council, said Nunes' assertions "were nothing more than an attempt to offer a lifeline to a White House caught in its own netting following President Trump's baseless tweets."

Matthew Waxman, a national security law professor at Columbia University, said Nunes' actions "in this case are contributing to, rather than alleviating concerns, about politicization of intelligence."

Nunes said the information on the Trump team was collected in November, December and January, the period after the election when Trump was holding calls with foreign leaders, interviewing potential Cabinet secretaries and beginning to sketch out administration policy. He said the monitored material was "widely disseminated" in intelligence reports.

Asked whether he believed the transition team had been spied on, Nunes said: "It all depends on one's definition of spying."

Nunes did not identify any of the Trump associates he said were "unmasked," but they are believed to include Michael Flynn, who was fired as White House national security adviser after misleading Vice President Mike Pence and other top officials about his contacts with Russia's ambassador to the United States.