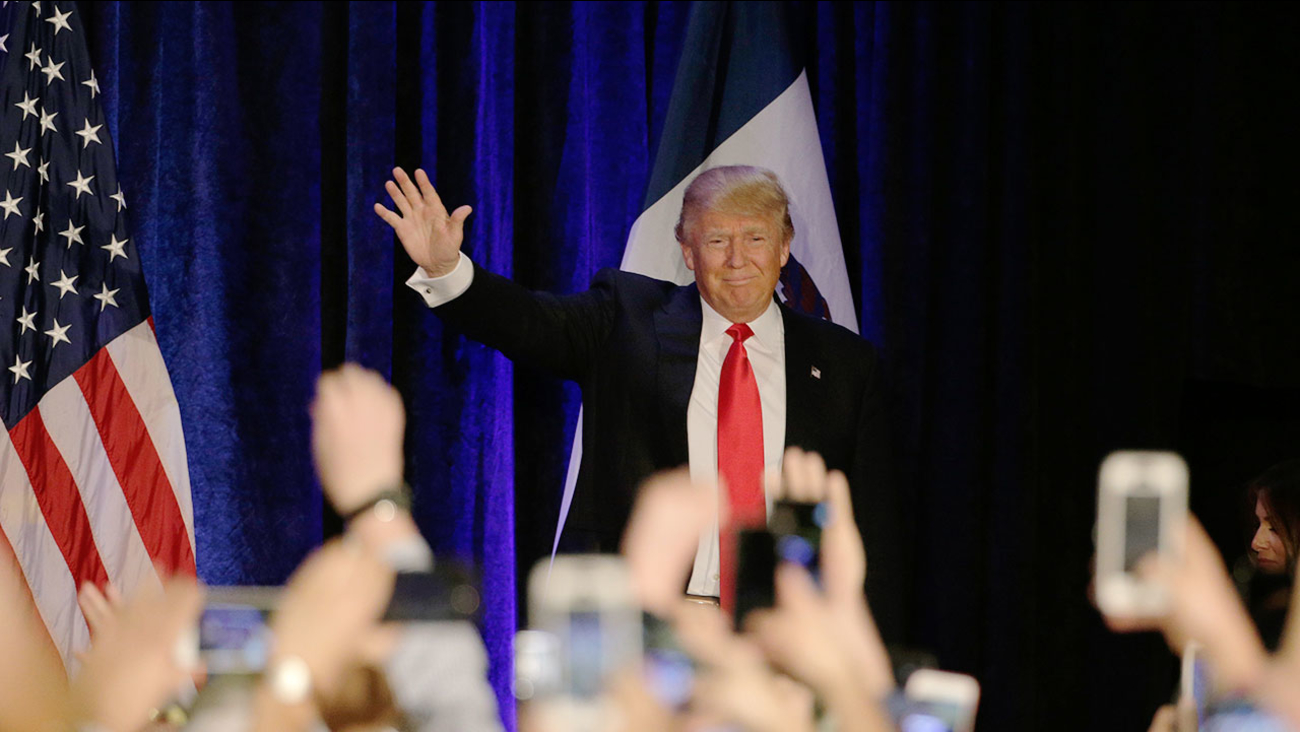 INDIANAPOLIS. -- In a stunning triumph for a political outsider, Donald Trump all but clinched the Republican presidential nomination Tuesday with a resounding victory in Indiana that knocked rival Ted Cruz out of the race and cleared Trump's path to a likely November face-off with Democratic front-runner Hillary Clinton.

Trump still needs about 200 delegates to formally secure the nomination, but Cruz's decision to end his campaign removed his last major obstacle.

"Ted Cruz - I don't know if he likes me or he doesn't like me - but he is one hell of a competitor," Trump said of his last fierce competitor whom he had dubbed "lyin' Ted." Trump, in a victory speech that was much lower-key than usual, promised victory in November, vowing anew to put "America first."

Vermont Sen. Bernie Sanders eked out a victory over Clinton in Indiana, but the outcome will not slow the former secretary of state's march to the Democratic nomination. Heading into Tuesday's voting, Clinton had 92 percent of the delegates she needs.

"I know that the Clinton campaign thinks this campaign is over. They're wrong," Sanders said defiantly in an interview Tuesday night. But Clinton already has turned her attention to the general election.

She and Trump now plunge into a six- month battle for the presidency, with the future of America's immigration laws, health care system and military posture around the world at stake. While Clinton heads into the general election with significant advantages with minority voters and women, Democrats have vowed to not underestimate Trump as his Republican rivals did for too long.

For months, Republican leaders considered him a fringe candidate and banked on voters shifting toward more traditional contenders once the primary contests began. But Trump proved to be surprisingly durable, tapping into Republicans' deep anger with party leaders and outlasting more than a dozen experienced political rivals.

Republican National Committee Chairman Reince Priebus declared the race over, saying on Twitter that Trump would be the party's presumptive nominee.

"We all need to unite and focus on defeating HillaryClinton," he wrote.

Indeed, Trump's first challenge will be uniting a Republican Party that has been roiled by his candidacy. While some GOP leaders have warmed to the real estate mogul, others have promised to never vote for him and see him as a threat to their party's very existence.

Even before the Indiana results were finalized, some conservative leaders were planning a Wednesday meeting to assess the viability of launching a third party candidacy to compete with him in the fall.

One outside group trying to stop Trump suggested it would shift its attention to helping Republicans in other races. Rory Cooper, a senior adviser to the Never Trump super PAC, said the group will help protect "Republican incumbents and down-ballot candidates, by distinguishing their values and principles from that of Trump, and protecting them from a wave election."

Indiana was viewed as the last gasp for Cruz, the fiery Texas conservative. He campaigned aggressively in the state, securing the support of Indiana's governor and announcing businesswoman Carly Fiorina as his running mate, but lost momentum in the closing days.

Cruz had clung to the hope that he could keep Trump from reaching the 1,237 delegates needed for the nomination and push the race to a rare contested convention.

"I've said I would continue on as long as there was a viable path to victory; tonight I'm sorry to say it appears that path has been foreclosed," Cruz told a somber crowd in Indianapolis.

Ohio Gov. John Kasich is now the only other Republican left in the race. But Kasich has won just one primary - his home state - and trails Trump by nearly 900 delegates.

Kasich pledged to stay in the race, with his campaign manager saying the governor would continue to "offer the voters a clear choice for our country."

Only about half of Indiana's Republican primary voters said they were excited or optimistic about any of their remaining candidates becoming president, according to exit polls. Still, most said they probably would support whoever won for the GOP.

Clinton, too, needs to win over Sanders' enthusiastic supporters. The Vermont senator has cultivated a deeply loyal following in particular among young people, a group Democrats count on in the general election.

Though Sanders claimed momentum, he has conceded his strategy hinges on persuading superdelegates to back him over the former secretary of state. Superdelegates are Democratic Party insiders who can support the candidate of their choice, regardless of how their states vote. And they favor Clinton by a nearly 18-1 margin.

Exit polls showed about 7 in 10 Indiana Democrats said they'd be excited or at least optimistic about either a Clinton or Sanders presidency. Most said they would support either in November.

With Sanders' narrow victory Tuesday, he picked up at least 42 of Indiana's 83 delegates. Clinton now has 2,201 delegates to Sanders' 1,399. That includes pledged delegates from primaries and caucuses, as well as superdelegates.