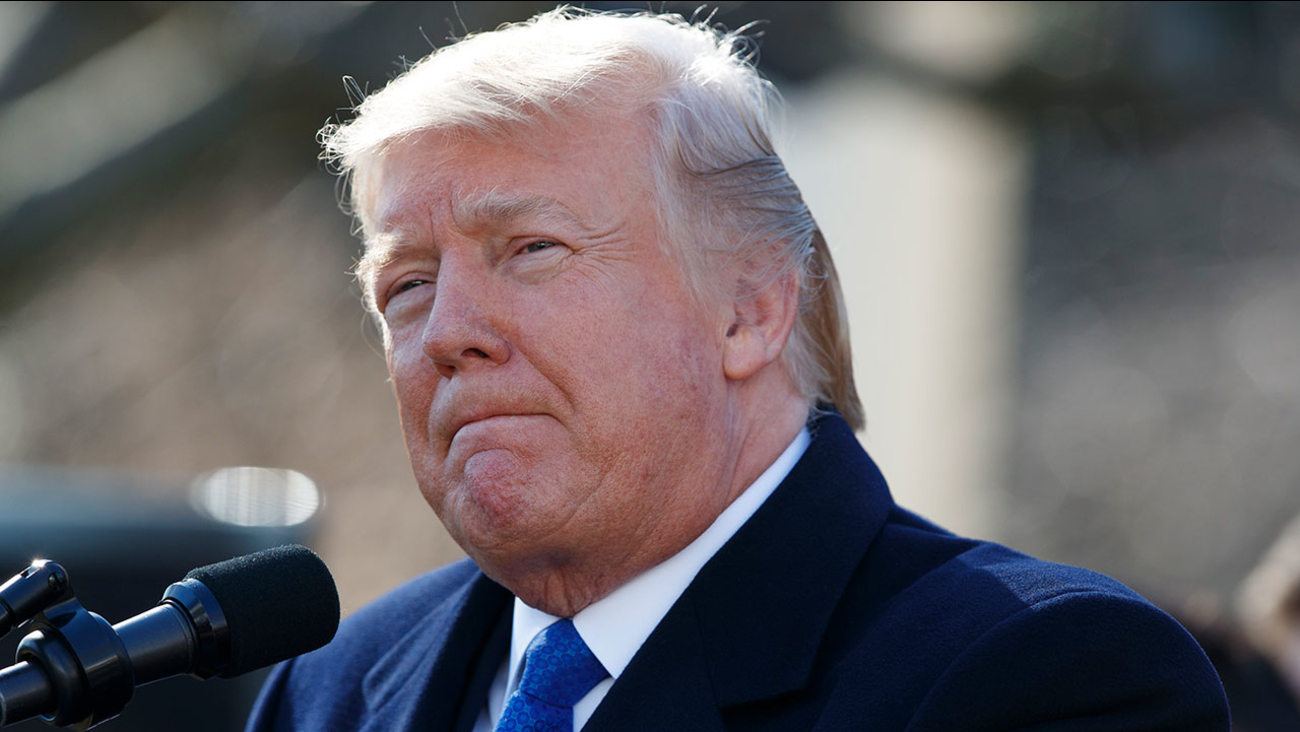 FILE- In this Friday, Jan. 19, 2018, file photo, President Donald Trump speaks to the March for Life participants from the Rose Garden of the White House in Washington. (Evan Vucci, File)

WASHINGTON -- President Donald Trump said Wednesday he's open to an immigration plan that will provide a pathway to citizenship for hundreds of thousands of young people who were brought to the country as children and are now here illegally.

"We're going to morph into it," Trump told reporters. "It's going to happen, at some point in the future, over a period of 10 to 12 years."

But immediately after Trump spoke, a senior White House official cast doubt on Trump's assurances, saying a pathway to citizenship for so-called Dreamers was "maybe" an option.

"That's a discussion point," said the official, who spoke on condition of anonymity because there was no authorization to discuss the issue publicly. The official added that Dreamers could immediately be given "legal status, as long as they behave themselves."

Trump's pronouncements - and the senior official's addendum - came as the White House announced it would be unveiling a legislative framework on immigration next week that it hopes can pass both the House and the Senate. The president's remarks amounted to a preview of that framework. He said he'll propose $25 billion for building a wall on the U.S.-Mexico border and $5 billion for other security measures.

But Trump has said repeatedly that any deal to protect those immigrants from deportation is contingent on money for the border wall and other security measures.

Trump was talking about the young immigrants who had been protected from deportation and given the right to work legally in the country under the Obama-era Deferred Action for Childhood Arrivals program, or DACA. Trump announced he was ending DACA last year, but he has given Congress until March to come up with a legislative fix.

Trump said he was confident that a deal can be reached on the issue. White House press secretary Sarah Huckabee Sanders said the framework to be unveiled Monday "represents a compromise that members of both parties can support."

The White House was trying to take control of the process amid criticism that the president had taken too much of a back seat during recent negotiations and had sent mixed signals that repeatedly upended near-deals.

"After decades of inaction by Congress, it's time we work together to solve this issue once and for all," Sanders said.

The senior official added that the White House planned to notify Congress on Wednesday night "exactly what the president's position is. Cause that's what they've been asking for. Cause they haven't been able to come up with their own workable positions."

Senators from both parties were making a fresh search for their own compromise immigration legislation, but leaders conceded that the effort wouldn't be easy and were already casting blame should it falter.

Around three dozen senators from both parties met privately Wednesday, and two top lawmakers said they'd try crafting a compromise bill based on colleagues' suggestions. The goal is to produce consensus legislation that would be the starting point for Senate debate on immigration, which is expected to begin Feb. 8, said Sens. John Cornyn, R-Texas, and Dick Durbin, D-Ill., their parties' No. 2 leaders.

"We're the Senate, we have our own responsibility under the Constitution and we decided in this room to move forward," Durbin said afterward. "If the president has some ideas he'd like to share, of course we'll take a look at them."

When asked if he knew what would be in the White House proposal, Sen. Jeff Flake, R-Ariz., said he didn't know and added, "But they're not writing the bill."

Senate Minority Leader Chuck Schumer, D-N.Y., vowed not to "let those who are anti-immigrant, who call giving the Dreamers hope 'amnesty,' block us. Because then we will fail, and it will be on the other side of the aisle that made that happen."

Schumer spoke about 12 hours after Trump put the onus on him. "Cryin' Chuck Schumer fully understands, especially after his humiliating defeat, that if there is no Wall, there is no DACA," the president tweeted late Tuesday. "We must have safety and security, together with a strong Military, for our great people!"

Sanders said the White House framework is based on dozens of conversations Trump and his staff have had with members of both parties and that "it addresses all of the different things that we've heard from all of the various stakeholders" during the past several months.

Sen. David Perdue, R-Ga., said Trump called him Wednesday morning and wants to provide "dependability for these kids," but still expects a deal to include money for border security and his promised southern wall, to limit immigrants' ability to sponsor family members and to end a visa lottery aimed at diversity.

Senate Majority Leader Mitch McConnell, R-Ky., has said if senators cannot produce a compromise plan by Feb. 8, he would open a debate on immigration legislation that would be "fair to all sides." That suggests both parties would be allowed to offer amendments.

Feb. 8 is the date legislation expires that reopened the government after a three-day shutdown, which began after Democrats demanded movement toward an immigration deal as the price for financing federal agencies.
Report a correction or typo
Related topics:
politicsdonald trumpimmigration reformdacau.s. & worldimmigration
Copyright © 2021 by The Associated Press. All Rights Reserved.
More Videos
From CNN Newsource affiliates
TOP STORIES