About 30 to 40 protesters, some from the Socialist Party USA, headed to the event to have their voices heard.

The march started out peaceful, but violence soon erupted when the protesters and supporters met. At one point, a woman was punched in the face by a man. An anti-Trump protester was then doused with pepper spray and other acts of violence were sparked.

The protesters wore masks and some were tackled, punched and kicked. One man who was beaten ended up jumping over a fence and running toward officers in an effort to get away from the crowd.

One protester, who wore his mask on camera, said it was a dangerous situation for them to be in.

"We're outnumbered one to 100 and these are not nice people we're dealing with. We put our hands behind our backs. We don't engage. We don't use violence. I may have a bruised rib or two," he said.

But Trump supporter Travis Guenther said someone came up to his "100-pound" wife and pepper sprayed her within close range.

"There was no fight. I'm an intellect. I can talk with anybody - no problem. But if you want to come and start a fight, I can fight. That's what that man got," he said.

Despite all the violence, there was some unity between the crowds. Some protesters and supporters were seen having civil discussions and even hugging. 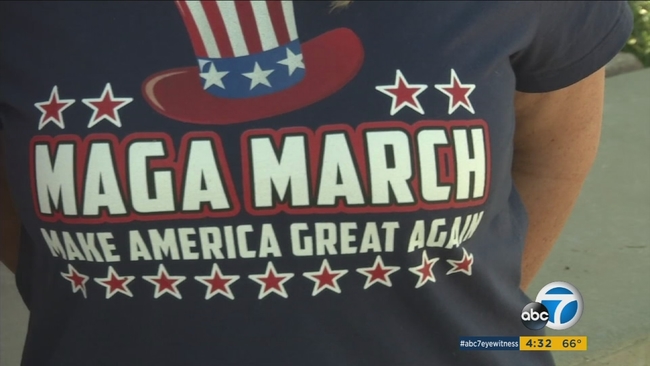