Trump Tulare fundraiser may have set a record in Central Valley 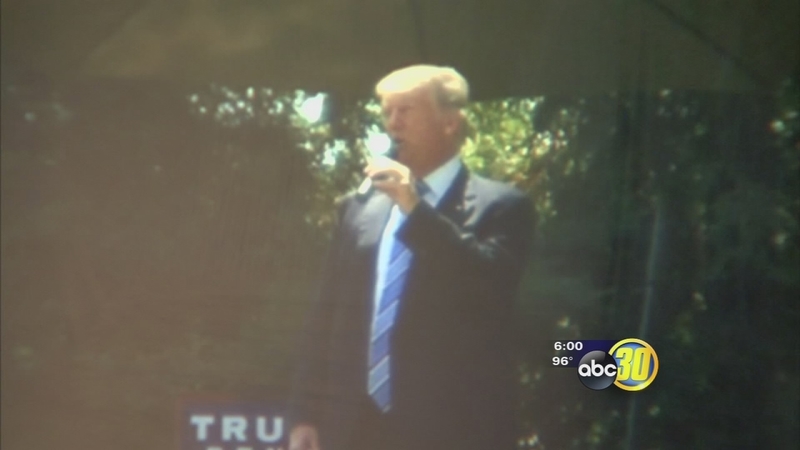 TULARE, Calif. (KFSN) -- Donald Trump stopped in Tulare for an hour long luncheon Tuesday and is believed to have set a fundraising record for the Central Valley.

Trump's second Valley visit drew a much smaller crowd, about 250 people, and the crowd of mostly farmers contributed about $1.25 million to his campaign. Many of them told us the $2,700 for lunch, or $25,000 for a meet-and-greet, was money well spent as they push to get more water released to farms here.

"It is a federal issue, and it is the Feds who are keeping the pumps off. So I'm very hopeful that he could do that," said Connie Conway, Former California Assembly Minority Leader.

Trump mentioned the water issue during his stop in Fresno in May, when he said there is no drought. The second time around, he got a water tutorial from Congressman Devin Nunes, who called Trump a fast learner who would help Nunes promote a bill to change water regulations. Something the Obama administration has refused to do.

"We need, actually, a letter of support saying he wants the congress to pass it. He wants the senate to pass it because they want to sign it into law," said Nunes.

Nunes said Trump is a rookie candidate who's better now at articulating exactly what he means on issues like water. With a major immigration policy speech scheduled for Wednesday, Nunes said he got a preview and it's also more nuance. He said Trump's done a good job pointing out problems with illegal immigration, but Central Valley farmers expressed how important guest workers are to their livelihoods.

"Can you do a wall and like a Bracero program," asked our reporter.

Nunes answered, "Yeah. I mean, it's always been the solution. It's security along with a permit system of some kind, and then a verification system."

That would be a big shift for Trump, but his Central Valley supporters believe it's coming. Even if it doesn't, they said he's still their best bet, so they don't mind knowing much of the money raised here Tuesday will be spent in the coming months in swing states like Ohio or Pennsylvania.
Related topics:
politicstularedonald trumptularetulare county2016 electionfundraiser
Copyright © 2021 KFSN-TV. All Rights Reserved.
TULARE COUNTY