Power back in some CA homes, but 600,000 remain in the dark to reduce wildfire risk 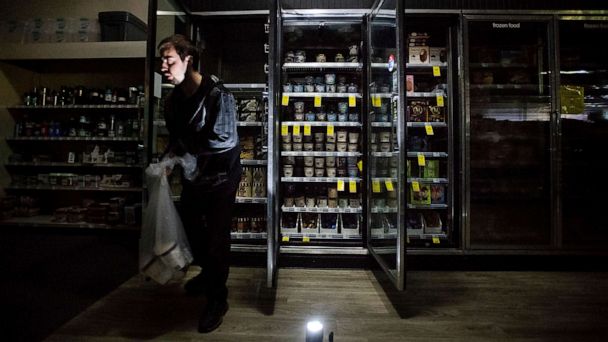 Pacific Gas and Electric is restoring power to some California homes whose electricity was cut Wednesday in order to reduce the risk of wildfires -- but the utility says that it could take days before all affected customers are back to full power.

Since then, the utility says it has restored power to around 50,000 customers in the Sierra Foothills area, and it anticipates restoring power to up to 80,000 customers by early Thursday.

The outages have come as a result of high winds, which contribute to blazes.

Last year's Camp Fire, the deadliest fire in California's history, was sparked by power lines owned and operated by Pacific Gas and Electric, according to Cal Fire. The fire, which originated near Pulga in Northern California in Nov. 2018, killed dozens.

A PG&E meteorologist saidthe weather forecast this week is the strongest wind event since the Oct. 2017 North Bay fires which were caused by "electric power and distribution lines, conductors and the failure of power poles," reported San Francisco ABC station KGO.

In Northern California more than 520,000 customers were without power Wednesday afternoon.

A total of 800,000 Northern and Central California customers are expected to be impacted eventually, PG&E officials said Tuesday night.

A local emergency was declared in Santa Clara County, where 38,250 customers were expected to be impacted, said county officials.

Alexandra Norman, associate head of school at Tilden Preparatory School Marin, called the outages "outrageous" and "such an inconvenience."

"It's been so hard for us to have class and continue with school throughout the power outage because really everything we do runs on power," Norman said.

In Napa County, police had to step in when a battery backup failed at a busy intersection. The city of Santa Rosa said it was aware of "multiple" traffic collisions due to stop lights being down.

In Sausalito, just outside San Francisco, Laura Stiles arrived to her office Wednesday to find "complete and utter darkness." Her colleague found it difficult to access the latest PG&E status online as the overwhelmed website went down for hours.

"We understand that they're doing what they have to do in a way, but trying to find out information has been the most frustrating, so we really don't know day to day how to plan," Stiles told ABC News.

Local school districts as well as UC Berkeley have canceled classes due to the outages.

Lindsey Garcia said she lost power at midnight and stocked up on candles and batteries ahead of time.

"It's going to be like a really rugged camping trip," Garcia told ABC News, and said her kids are going "stir-crazy."

But she noticed it wasn't especially windy and questioned why a power shutoff was necessary.

She wishes her children didn't have to miss school, but she's using the outage as an opportunity to get them to play outside -- instead of being tied to electronics.

Once the winds die down, PG&E will need to inspect every power pole across the area before turning the lights back on. Authorities said restoration can be anywhere from 36 hours up to five days.

"We understand the effects this event will have on our customers and appreciate the public's patience as we do what is necessary to keep our communities safe and reduce the risk of wildfire," Michael Lewis, PG&E's senior vice president of Electric Operations, said in a statement.

Southern California could be impacted, too, as gusty winds move in later in the week.

"We won't just de-energize for the sake of doing it," Ohanian told ABC News Wednesday morning. "We know it's an inconvenience for our customers so we try to be thoughtful about what we do, but the potential is there."

"And unlike a planned outage where we can schedule it for a certain period of time, this is a function of when the wind blows and when the weather materializes," he said.

The California Highway Patrol is reminding drivers that if a traffic light is flashing, treat it as a stop sign intersection. If the light is out, treat as an all-way stop.