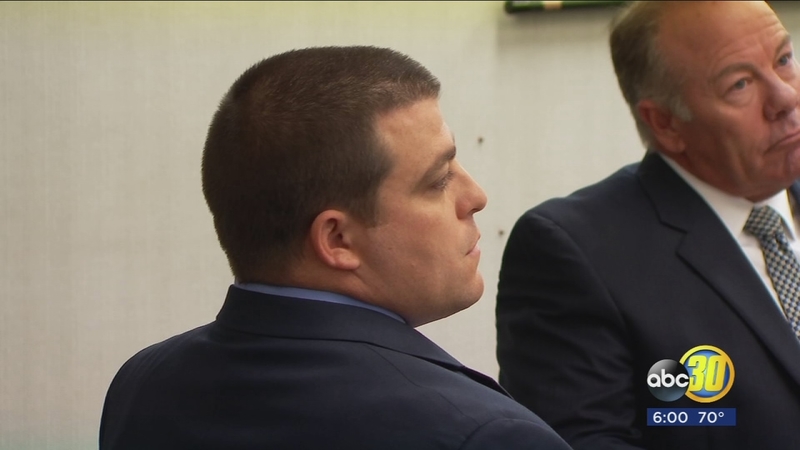 FRESNO, Calif. (KFSN) -- Sgt. Rod Lucas was shot to death in a Sheriff's Department Office near the Fresno Airport on October 31, 2016.

One of those in the office, who saw everything but the actual gunshot took the stand. Retired Deputy John Tilley, who worked as part-time help testified he watched as Detective Jared Mullis pulled out his gun to show Deputy Rod Lucas his holster.

"And as he was talking to Rod he pivoted the holster so it lined up with the gun and started to slide the gun into the holster. At that point, I believe I looked away," said John Tilley.

Tilley testified once he turned to send his wife a text message, he heard a loud sound, and looked back and saw Mullis holding his gun and Lucas on the floor.

That is also what he told district attorney investigators in a video reenactment. But on the stand, acknowledged he later expressed confusion about what he saw.

"I'm not sure that what I said or what's happened accurately portrayed what I remember, here again, I'm having problems remembering exactly what I saw," said Tilley.

Mullis told investigators two versions of what happened. Detective Jose Diaz testified another Deputy told him Mullis initially said the gun dropped as he was handing it to Lucas, and it went off. Later, it is alleged he claimed the gun went off in Lucas's hands.

Department of Justice Criminalist Mike Appel testified that based on the gunpowder and other residue on Lucas shirt, the shot that killed him came from between two and three feet away. He also testified he was unable to make the gun accidentally discharge even when he threw it on the ground or hit it with a hammer.