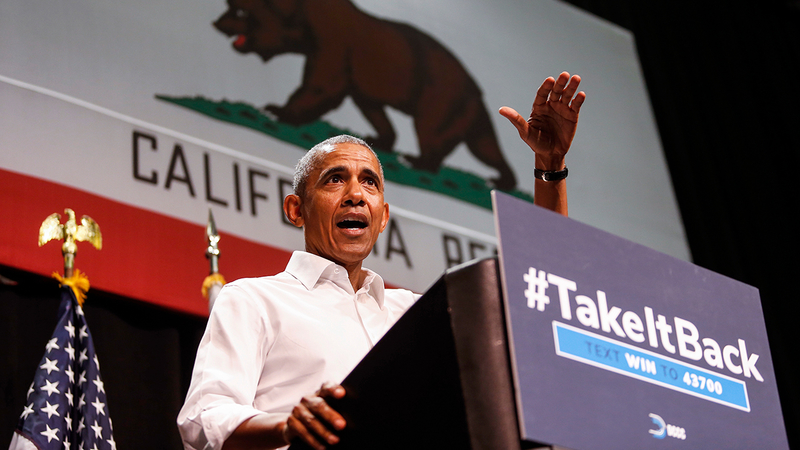 ANAHEIM, Calif. -- Barack Obama jumped back into campaign mode Saturday with a visit to Orange County, a once-solid Republican stronghold, touting Democratic congressional candidates and reminding voters of the stakes in the November elections.

The former president told a crowd of hundreds at the Anaheim Convention Center that "we're in a challenging moment" when enormous changes are taking place. "People feel unsettled, people feel scared" and they're worried about their children's future, he added.

Obama's afternoon remarks began with a bemusing anecdote about the time during his college years when he and some friends were ejected from Disneyland after they were seen smoking inside the park.

.@BarackObama in #Anaheim “What I deeply believe is that there’s no set of issues we can’t solve if we’re working together and true to the traditions that are best in America.” @ABC7 pic.twitter.com/FhTddy5JbV

"This is a true story, everybody. I was booted from the Magic Kingdom," Obama said to laughter.

Walt Disney Co. CEO Robert Iger later tweeted, referring to the ex-president: "He can always come back, as long as he doesn't smoke!"

@BarackObama just opened his speech in Anaheim with a story from his college years about getting kicked out of Disneyland for smoking cigarettes on a ride. "This is a true story everybody, I was booted from the Magic Kingdom!" He can always come back, as long as he doesn't smoke!

Obama's remarks were delivered the day after his strongly worded critique of his successor in the White House, saying President Donald Trump was "capitalizing on resentments that politicians have been fanning for years."

"If we don't step up, things can get worse," Obama said Saturday. "In two months, we have the chance to restore some sanity to our politics. We have the chance to flip the House of Representatives and make sure there are real checks and balances in Washington."

Barack Obama jumped back into campaign mode with a visit to Orange County, a once-solid Republican stronghold.

"Their base can go have a rally, but it gets my base more motivated," Whitaker said. "It works for me."