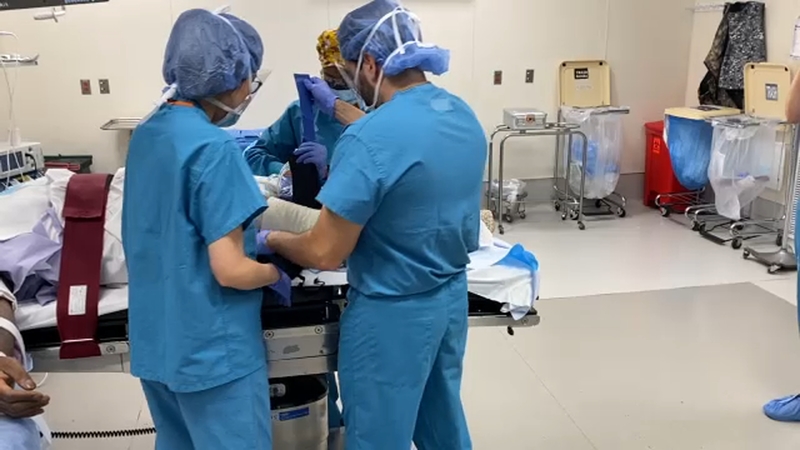 FRESNO, Calif. (KFSN) -- Leafer Miller was diagnosed with diabetes a decade ago, but last year had to undergo surgery at Community Regional Medical Center.

Miller said in an interview provided by CRMC, he needed to have an ulcer removed from his right foot.

"To try to cut out what was infected, but it spread so much the next day, they let me know we're going to have to amputate your entire leg," he said. "So it was either that or die."

We spoke with Vascular Surgeon Dr. Sammy Siada, who operated on Miller.

It's a sad situation because Dr. Siada said Leafer's leg amputation could have been avoided.

"Him being young and otherwise energetic, his diabetes became a secondary priority because he didn't have access to healthcare and he couldn't afford healthcare even if he wanted it," he said.

Dr. Siada says once the COVID-19 pandemic hit, it made it even more difficult for Leafer to access medical care.

Miller worked office jobs but says the lack of a steady income and high insurance costs kept him from effectively treating his diabetes.

"I was kind of stuck in the middle between yeah, I've got benefits and things like that but I really can't afford the high price of insulin as well, too," he said.

Dr. Siada says that type of scenario, unfortunately, is a common problem in minority communities around the Valley.

"There's a significant amount of health disparities, particularly racial and ethnic disparities," he said. "Hispanic and African-American patients tend to have higher poverty and higher unemployment."

Despite his health challenges, Leafer Miller is keeping an upbeat attitude about his future.