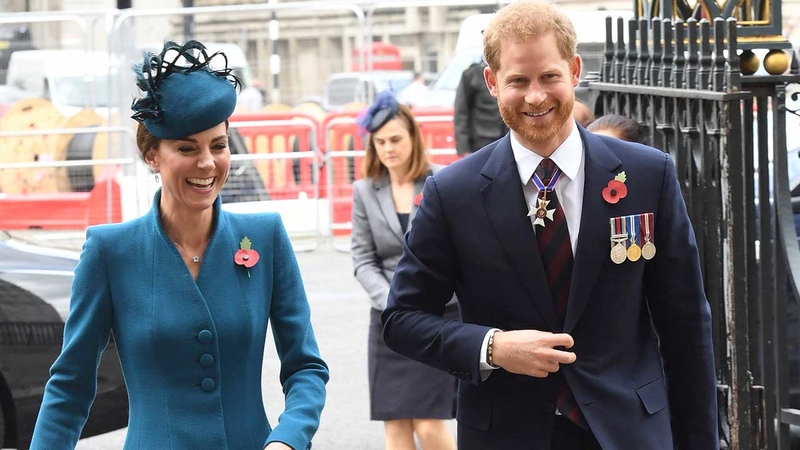 Fans of the royal family got to see an unusual pairing on Thursday: Prince Harry appeared without his wife Meghan, and he was alongside Duchess Kate, who was there without husband Prince Willam.

The two were both attending the Anzac Day service at Westminster Abbey in London. Anzac Day is a memorial holiday on the anniversary of New Zealand and Australian soldiers, known as Anzacs, landing on the Gallipoli Peninsula in 1915. More than 10,000 soldiers from the two countries were killed during that World War I campaign in what is now Turkey.

Kate made the appearance without her husband because the prince is currently abroad. The second-in-line to the throne is on a two-day trip to New Zealand, where his activities include attending an Anzac Day service and meetings with medics, police officers and survivors of the New Zealand mosque attacks. On March 15, 50 people were killed and dozens injured in terrorist attacks at two mosques.

Prince William said of traveling to New Zealand after the attacks that "a good friend doesn't pick up the phone when people are in need. You travel to their place and you put your arms around them," according to the country's police commissioner.

Prince Harry, meanwhile, attended the service without his wife. Duchess Meghan, formerly known as Meghan Markle, is expected to give birth sometime in April. She and Prince Harry said in a statement earlier this month that they plan to keep the details of the baby's birth private until they've had a chance to celebrate as a family.

This has been a big week for the royal family. Prince Louis, Kate's youngest child, turned one on Tuesday, and Queen Elizabeth II turned 93 on Sunday.

RELATED PHOTOS: William, Kate and their royal family through the years