How Project Row Houses is transforming a community 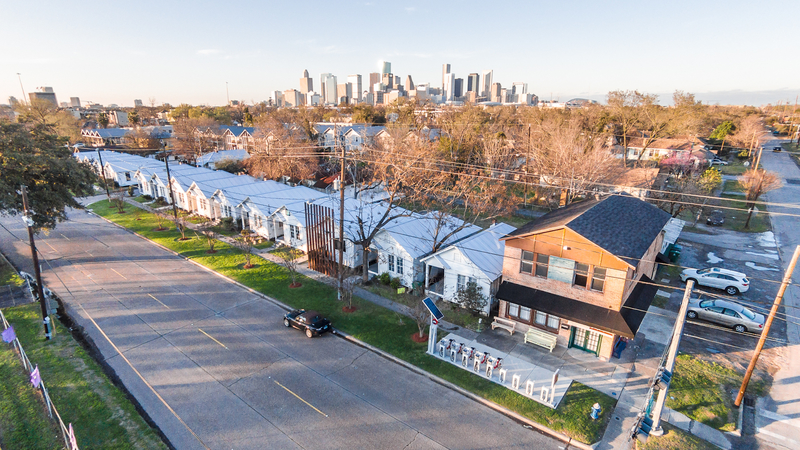 The legacy of Project Row Houses

HOUSTON, Texas -- Thirty years ago, Houston's Holman Street was one of the most dangerous areas in the city, a place known for crime and drugs. Today, it's home to one of the most well-known social sculptures in the world.

Project Row Houses started as an experiment in 1993. Artist Rick Lowe saw potential in row of abandoned shotgun-style homes on Holman Street and rounded up six other artists to transform the homes into art installations.

"What the city saw as poverty and all the social ills that come along with that, blight and crime, artists saw as an opportunity to really use their gifts, skills and talents to enhance and transform the community," said Eureka Gilkey, Executive Director of Project Row Houses.

Each art space - which changes every few months - addresses a different topic challenging the community.

Artist Leah Gipson created a row house installation called 'She Asked Her Mother', a space for the protection and safety of children. It includes the 'Black Girlhood Altar', which is dedicated to missing and murdered black girls. A piano sits in the center.

"One of the ways you can give an offering to this altar is actually to play the piano," said Gipson. "So you can come and play the piano as part of the piece. It's meant to be interactive just like all of the other objects or offerings you can bring, you can bring music."

Gipson says when guests play the piano and see the display, it draws them in to the message.

"I've never really been given the opportunity to do anything to kind of touch on my own heritage," said Ward. "It means kind of the world to me."

Project Row Houses now covers five city blocks and 39 homes and buildings - all dedicated to art programs, community enrichment and neighborhood development. It started a Small Business Incubation Program and a Young Mothers Residential Program. Project Row Houses is also dedicated to rehabilitating the community's legendary Eldorado ballroom, which was built in 1939. The ballroom was once one of the most acclaimed live venues to black musicians in the country. Legends like Etta James, B.B. King, Ella Fitzgerald and James Brown once performed there.

"This was a very important venue in Third Ward," said David Bucek of Stern and Bucek Architects. "It was not just a musical venue, it was a social club. It was really the focal point in the Third Ward through much of the 20th century. Every major musician in the 20th century played here. A lot of folks got their start here at the Eldorado and became national figures."

The $9.7 million renovation will be restore the ballroom to its former glory, and some new features will be added - including a market and a cafe to help combat the Third Ward's food insecurity issues.