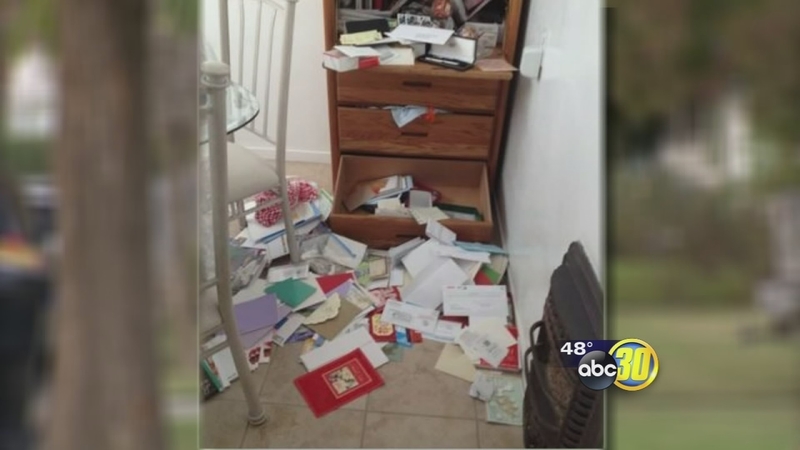 HANFORD, Calif. (KFSN) -- A Hanford woman says thieves ransacked her home while it was under a tent for fumigation and stole priceless family heirlooms. A pest control service discovered evidence of the break-in on Saturday, but the tent went up on Thursday.

The homeowner talked with Action News but she didn't want to be identified, "just a total disaster, it actually looks like a war zone," she said, "every closet, every drawer, emptied... many, many sentimental things."

The victim says all the sentimental things are missing -- jewelry passed down through generations, family heirlooms, her mother's charm bracelet, and a safe full of unopened letters to her granddaughter. She says burglars stole all of it while her home was being fumigated for termites. "It's very disappointing that someone would come in and take the things you had saved because they meant something."

Her home was under a tent for 3 days. She didn't set the alarm but says the pest control service had used special locks to keep people out, at least that's what she thought.

Hanford Police Chief Parker Sever says the burglars slashed a hole in the tent with a knife and broke in through a doggy door. After that, they ransacked the home from the basement to the master bedroom - all while there were hazardous chemicals inside. Chief Sever said, "it's dangerous in there with those noxious chemicals and you can probably do a lot of damage to yourself by doing that."

As for the homeowner, she's cleaning up the mess the thieves left behind and hoping they'll have a change of heart. "I hope that not only some of the stuff re-appears but I hope whoever did it, reconsiders what they've done and they think about how they would want their own parents or grandparents to be treated," the woman said.
Related topics:
hanfordkings countycrimeburglarythefthanfordhome
Copyright © 2021 KFSN-TV. All Rights Reserved.
KINGS COUNTY
Looking back at the ups and downs of COVID in Central CA
Kings County hopes for boost in COVID vaccinations
COVID vaccine hesitancy: A roadblock to herd immunity?
Johnson & Johnson vaccine arriving in Kings Co. next week
TOP STORIES
Community rallying around Clovis girl battling leukemia
Teen accused of killing father, brother faces possible death penalty
CSU to require all students, staff to get COVID-19 vaccine
Flex Alert issued for California for Wednesday from 4 p.m. to 9 p.m.
Kings Co. pushes for more vaccinations as COVID cases spike
Changes coming to Fresno Yosemite International Airport
Clovis Community College fights pandemic-induced enrollment decline
Show More
Merced police identify suspect in murder of teen near Walmart
CDC reverses course on indoor masks in some parts of US
19-year-old killed in head-on crash with drunk driver near Tulare: CHP
Fresno's Eviction Protection Program officially begins
Gov. Newsom pulls kids from summer camp with no mask requirement
More TOP STORIES News