Massive flames could be seen from far away as firefighters from several crews worked to douse the blaze.
KFSN
By Vanessa Vasconcelos 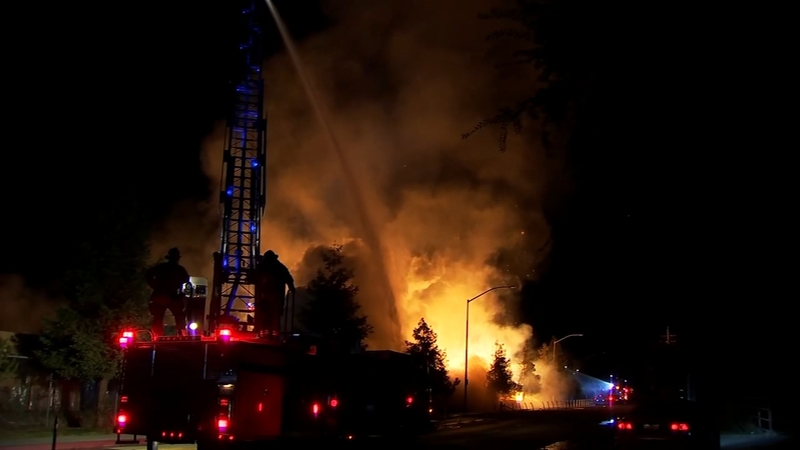 FRESNO, Calif. (KFSN) -- More than 12 hours after a fire tore through the yard of Maxco's distribution in hub in Reedley, smoke could still be seen coming from the charred debris.

Vice President of Operations and Sales, Mark Flaming, said, "It appears to be somewhere between a half a million and a million dollars in damage and of course the clean-up and the labor.

Maxco is known for making boxes and other packaging materials for growers across the United States.

Outside of the rubble, workers at the facility went through all of the pallets checking for smoke and water damage.

Reedley Fire Battalion Chief Justin Watson said firefighters called for a commercial alarm as they "couldn't get within about 200 feet of the initial fire and there was damage to surrounding property because of the heat."

Watson said despite the challenges faced from the firefight, wind direction and speed worked in their favor, helping them contain the fire.

"The wind going in the opposite direction would have been detrimental to our commercial structures and would've affected a lot of packaging machinery," added Watson.

That equipment, along with business offices were just feet away from intense flames that sent smoke drifting for miles.

Fresno Fire dispatchers fielded more than a dozen calls from residents thinking a fire was burning much closer to home.

Fresno Fire Department Public Information Officer Shane Brown said, "This morning it taxed our resources, where on top of having to run normal emergency calls they were also out chasing smoke."

Brown said that's not uncommon for the hot summer months, especially as wildfires burn because of the "smoke getting into the atmosphere, laying out across the valley."