Bishop Joseph Brennan discusses his direction for Diocese of Fresno, amidst scandals, challenges 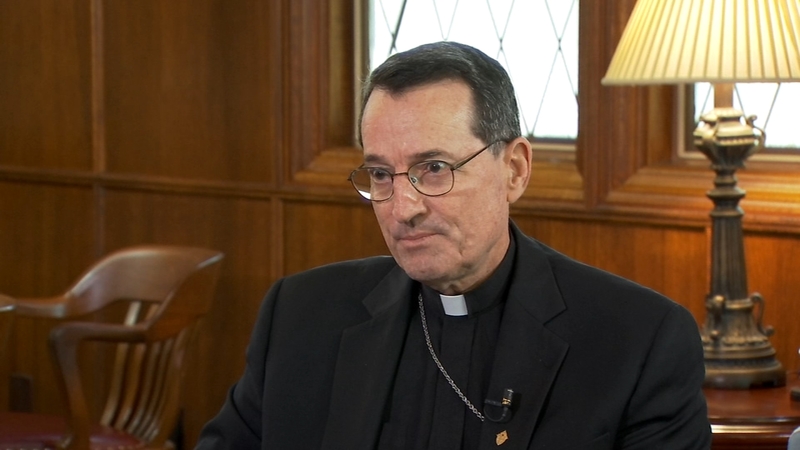 Bishop Joseph Brennan discusses his direction for Diocese of Fresno, amidst scandals, challenges

FRESNO, Calif. (KFSN) -- Looking around his office, it's easy to tell Bishop Brennan has a sense of humor. From the classic red phone with direct dial to the Pope to hints of his love for chocolate, the Bishop has learned how to balance life.

Joseph Brennan grew up with nine brothers and sisters, including a twin brother. As devout Catholics, his family attended mass every Sunday, but there was always time for basketball and singing. It wasn't until his first year at college in Oregon that he felt a call to the priesthood.

The Diocese of Fresno spreads across 35,000 square miles with a population of more than 1 million Roman Catholics. More than two-thirds of those Catholics are Latino.

Bishop Brennan is aware of the current political climate regarding immigration. And he has his own opinions.

"I'm not for open borders. There's great value to national integrity," he said.

The Bishop says he supports the rights of countries to defend their boundaries. On the other hand, he believes the ICE raids are oftentimes too punitive. He says illegal immigrants should be treated with charity.

As the 65-year-old Bishop begins this new chapter in his life, it comes at a time where young Catholics are leaving the church in droves. A 2018 survey showed those leaving the faith cross all age groups. The fastest-growing demographic was age 18-29.

"It's sobering, it's a little frightening. Kids are, and I mean little guys, young guys, are self-identifying as unattached, unaffiliated," he said.

The survey noted "lack of faith" as the biggest reason for leaving, perceived hypocrisy was another. Certainly, the sex abuse scandal isn't helping.

"I'm gonna do whatever needs to be done to keep our children and our young people safe," Brennan said. "In fact, broaden that to vulnerable people. Who may not be minor, but may be adults."

Seven priests are currently on administrative leave. The Bishop personally put three of them on leave after being installed in May. He says the list of priests will be published sometime before November.

Even if they are no criminally charged, Brennan says the diocese will do its own investigation and mete out punishment where appropriate.

"If it's something that's really egregious, really serious, we might, what's been called in the common nomenclature, de-frocking," he said.

Bishop Joseph Brennan says he's learned over the years that agonizing over situations isn't worth it.

"I haven't lost one night's sleep since I became a Bishop. I hope that's OK. Maybe I should," he said.