'Everything we had is gone:' Residents get first look at destruction caused by 3-alarm apartment fire 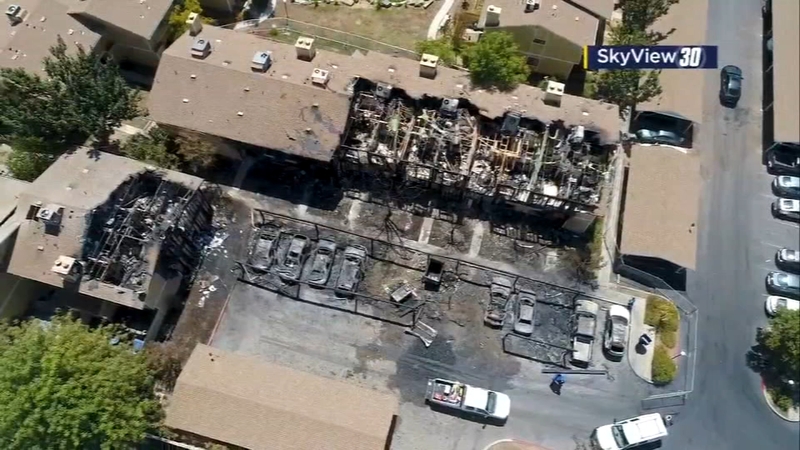 FRESNO, Calif. (KFSN) -- The aftermath of Sunday's three-alarm fire at the Maplewood Apartments sent shock waves through a community.

"I'm like numb; everything we had is gone," said Felicia Valdez.

As residents returned to salvage what they could, many were shaken to their core.

"I'm thankful that we didn't, that we weren't home and stuck in that fire," she said.

Red Cross volunteers spent most of the night getting assistance to the people displaced by the fire, but that entails more than financial help.

"We have volunteers trained in mental health care and spiritual health care; it's what it looks like after the disaster and how you cope with those things," said Red Cross spokesperson Nicole Maul.

So far, the cause of the fire is unknown, but investigators say it started in a dumpster beneath the wooden carport.

"First thing this morning, I get my coffee and I walk out, and it looks like a bomb hit the area," said complex resident Lawrence Trujillo.

Former Selma volunteer firefighter Lawrence Trujillo describes the moments he came home to the thick plume of smoke. Once he knew his daughters were safe, he sprang into action.

"I was helping him pull the hose out, hook it up to the hydrant and then as we were hooking the hydrant to the engine, he was like, 'There's no water'," Trujillo said.

"There was a hydrant approximately 50 feet behind Engine 6, but when they went to open that hydrant up, it was nonfunctioning," said fire battalion chief Rich Cabral.

Cabral says hydrants are inspected annually, and the hydrant that malfunctioned was last inspected in December of 2018.

According to Fresno Fire, of the more than 15,000 hydrants within city limits, there are 100 hydrants currently out of service for repair.