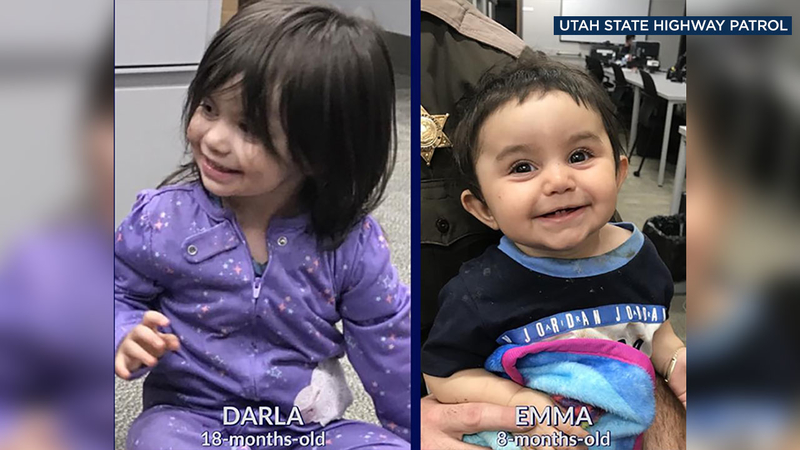 RIVERSIDE, Calif. -- Two sisters, ages 18 months and 8 months, have been found alive in Utah with their mother's live-in boyfriend after he was accused of abducting them, authorities confirmed.

In the middle of a press conference Thursday asking for the public's help finding the children, Riverside police made a stunning announcement:

"It appears the suspect, his parents and the two children have been apprehended by highway patrol in Utah," said Lt. Charles Payne with Riverside police. "It does appear they are in custody at this time, thankfully. It appears both children are safe."

They were apprehended after Utah state troopers conducted a traffic stop on a white Dodge van on Interstate 15 near Cedar City.

Investigators with the FBI and Riverside Police Department were working with social workers to get the girls back home.

Two sisters, ages 18 months and 8 months, have been found alive in Utah with their mother's live-in boyfriend after he was accused of abducting them, authorities confirmed.

Riverside police said it all began with a verbal and physical domestic altercation between the mom and the boyfriend that occurred Tuesday between 9 p.m. and 10 p.m. at their home in the 3100 block of Grace Street in Riverside.

Authorities said the mother put her two girls, identified as 18-month-old Darla Yonko and 8-month-old Emma Yonko, to bed and temporarily left the residence. When she returned around 11 p.m., her girls were gone, and so was her boyfriend.

Investigators arrived on scene and determined that the boyfriend, identified as 24-year-old Joshua Adle, had taken the children without their mother's consent. Adle also took the children's legal identification documents, authorities said.