Driver lights firework during California protest, gets it tossed back into car - Video

Video appears to show a driver in Southern California attempting to light a firework in the middle of a protest, but then flee from the vicinity after the firework was tossed back into the car.
KABC 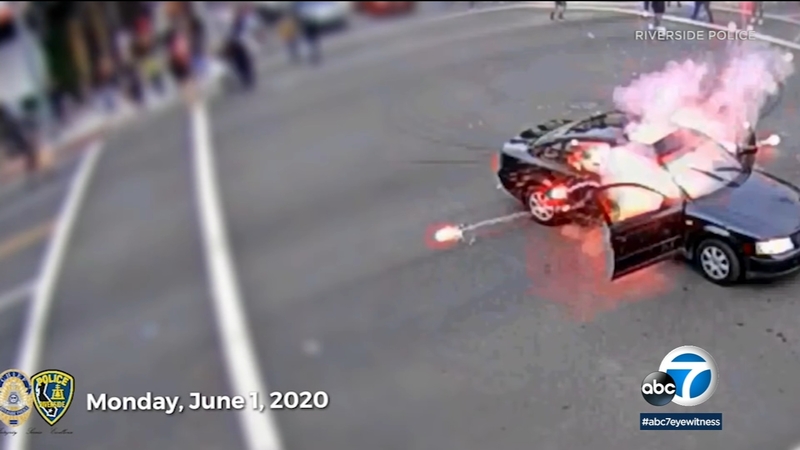 Driver's firework tossed back into car during IE protest - Video

RIVERSIDE, Calif. -- Video appears to show a driver in Southern California lighting a firework in the middle of a protest, but then flee from the vicinity after the firework was tossed back into the vehicle.

Police released video from the June 1 incident in downtown Riverside that shows a car stopping at an intersection, followed by the driver appearing to light a large firework.

Footage shows a person from the crowd tossing the firework back into the vehicle as people nearby run.

Moments later, the firework explodes inside the car.

Riverside police say a "group of onlookers and the suspect driver" then assaulted the person who threw the firework into the vehicle.

Based on the video, detectives obtained the car's license plate and photos of the driver, police say. The suspect was identified as Gabriel Castillo, a 20-year-old Perris resident currently on probation for evading police.

Castillo was arrested Tuesday, after a probation search was made at a home. He was booked on illegal fireworks and probation violations.

The department says it is still looking for several other people that vandalized and looted businesses that day, and released a video of the instances.