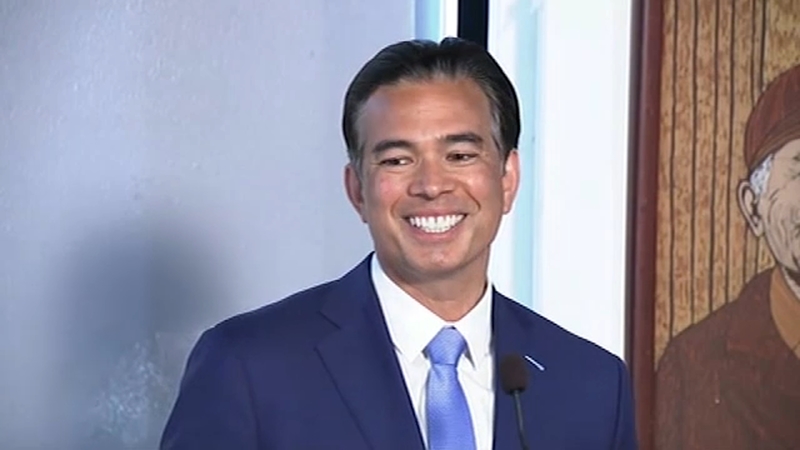 Newsom nominates Rob Bonta to be next CA attorney general

Newsom made the announcement at an afternoon news conference in San Francisco, where the 48-year-old Bonta was joined by members of his family.

If confirmed by the state Legislature, Bonta will become the first Filipino American to serve as California's attorney general. He would replace Xavier Becerra, who was confirmed last week as President Joe Biden's pick as U.S. Health and Human Services secretary.

Pending likely confirmation by the state's Democratic Legislature, Bonta would hold the job through 2022 when he would have to run for election.

His nomination was supported by several Asian American and Pacific Islander groups, along with progressive groups and leaders on criminal and environmental justice. It comes amid a time of rising violence against Asian Americans across the U.S.
EMBED More News Videos

"Rob represents what makes California great -- our desire to take on righteous fights and reverse systematic injustices," Newsom said in a prepared statement.

"This is an incredibly important office in the cause of -- yes -- racial justice, social justice, economic justice, environmental justice -- by the way, all things, professionally, since 2012, Rob Bonta has been on the forefront of as well," the governor said before introducing his nominee on Wednesday afternoon.

In a tweet after the announcement was confirmed, Bonta said he was "honored & humbled that @GavinNewsom has chosen me to serve as your next Attorney General." The tweet included a campaign-style video that described his parents' history of activism and his legislative record.

"Thank you, Gov. Newsom, for the privilege and honor of a lifetime," Bonta said at the news conference, taking to a podium after greeting the governor with an elbow-bump. "I'm so humbled by the trust and the faith and the confidence that he placed in me."

Bonta was elected to the state Assembly's 18th District in 2012, where he represents the cities of Oakland, Alameda and San Leandro. He became the first Filipino American state legislator in California's then 160-plus-year history.

He is a prolific author of legislation, often with a criminal justice reform focus. State laws he's introduced that were signed into law include a measure to automatically expunge marijuana related offenses from people's records after California legalized recreational marijuana, to eliminate private prisons and to end cash bail. Voters rejected the bail change in a 2020 referendum.

Attorney general is among the most highly coveted statewide offices in California, second only to the governor in terms of public recognition and power. Vice President Kamala Harris previously held the job, as did former Gov. Jerry Brown.

California attorneys general have used the job to go after private companies over labor law, environmental violations and predatory practices, among other things. Becerra sued the Trump administration more than 100 times during his four years in office, challenging the Republican former president's policies on immigration and health.

I am honored & humbled that @GavinNewsom has chosen me to serve as your next Attorney General. Join our fight. https://t.co/nX8U3Xray4 pic.twitter.com/ANeOOxGIAj